From diverse backgrounds, Vincent and Pat Chin are the embodiment of Jamaica’s national motto — ‘Out of Many One People’. Growing up in a colour-blind society and how they built a music empire are just some of the things she reflects on in her memoirs, Miss Pat – My Reggae Music Journey. The book will be officially released in March but is available online through VP Music, a company owned by her family.

Pat Chin is the quiet matriarch of VP Records, a mom and pop independent label she and Vincent started in 1979, shortly after moving to Queens, New York from Kingston, Jamaica. In Kingston, they operated Randy’s Records which was another successful venture. 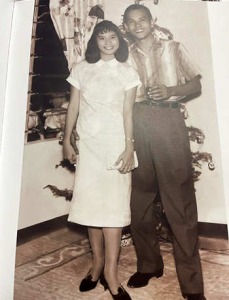 Vincent died in South Florida in 2003 at age 65 but his wife has lived to see their small company become the largest distributor of reggae in the world.

But she implores readers to see beyond her family’s 63-year ties to the music business. “I wanted to show the world something about Jamaica, that we are a diverse culture. Indian, Chinese, African, Jewish people, Syrian,” she said, adding: “It’s a very special place.”

Pat Chin’s parents were first-generation Jamaicans. Her father’s family came from India; her mother’s family is from China. Vincent’s paternal line is Chinese. His mother had African heritage. They established Randy’s in downtown Kingston, an area with a melting pot more tolerant than New York, London, or Paris during the 1950s and 1960s.

She credits working the store counter for enhancing her knowledge of the music business at a time when there were not many women in administrative roles in reggae.

Pat Chin says she admired each man’s different approach to production. Over time, she has developed new appreciation for Vincent as a producer.

“He used to do the softer music, like We Will be Lovers (Lord Creator), Bridge Over Troubled Waters (Jimmy London) and Too Late to Turn Back Now by Alton Ellis,” she stated.