Any discussion about poetry and its social impact gets Yasus Afari talking up a storm. The Rastafarian artiste has an unyielding passion for keeping the spoken word medium alive in Jamaica.

Afari is the founder and chief organiser of Poetry In Motion, an event that observes its 18th staging on February 28. Because of the Coronavirus, it will be held virtually.

“First of all, we are poets who have a certain specialty called dub poetry which serves as an artistic, literary, musical, and poetic tool of empowerment, social-renewal, social transformation and liberation. So, whether poetry or dub poetry, it’s the same thing, we chant the same song/poem!” he declared. 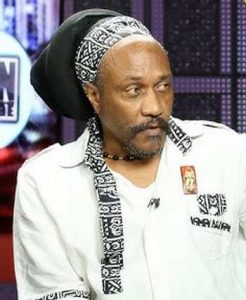 Poetry In Motion will be held in Mandeville, a central Jamaica town that has become a retirement colony for Jamaicans who lived in the United Kingdom for many years. Since its inception, it has fielded major names in Jamaican poetry including Edward Baugh, Mervyn Morris, and Mutabaruka.

This year, the event features Benjamin Zephaniah, a British activist/poet in the mould of Linton Kwesi Johnson; and Stephen Wise, an American musician who has recorded and toured with Stevie Wonder.

Born John Sinclair, Yasus Afari has been a disciple of poetry since his youth in St. Elizabeth parish, located about 25 miles from Mandeville. The first poem that struck a chord with him was Claude MacKay’s Lovely Dainty Spanish Needle; then came the dialect-driven work of cutting-edge artistes.

“At a later stage of my development, the range of works of Miss Lou caught my imagination, along with Sonny’s Letter, Darcas Gone A Jail, The Eagle and The Bear by LKJ, Mi Cyaan Believe It by Mikey Smith and Butta Pan Culture, Siddung Pon De Wall and White Man Country by Mutabaruka. Plus the poetic works of Bob Marley, Peter Tosh, Bunny Wailer, Pablo Moses, all had an impact on me in the very early stages of my development as an artiste, poet, and dub poet,” he recalled.

Afari’s own contribution is significant. He has recorded a number of albums and many singles including Put it Een and Fi Wi Sound; along with Garnet Silk and Kulcha Knox, he was part of the roots revival that transformed dancehall music from gun lyrics and ‘slackness’ in the 1990s.

“Yes, I really think so, to a large extent, as the influence is evident in the works of people like Papa San, Stitchie, Ini Kamoze, Professor Nuts, Ninjaman, Bounty Killer, Garnet Silk, Alkaline, Vybz Kartel, Chronixx, Kabaka Pyramid, Protoje, Jah9 and Koffee, among many others. It may not be glaringly obvious to some of us but it’s self-evident if you examine the works and even the artistic evolution and history of some of these people,” he explained. “Additionally, the huge success and unprecedented and positive response to Poetry in Motion’s Golden Tongue Awards Poetree Challenge, speaks volumes as to the impact of poetry/dub poetry to the Now Generation.”