In the early 1960s, Derrick Morgan and Jamaica were on the cusp of exciting times. Morgan, a partially blind singer, was one of the early exponents of ska while his country was on the verge of independence from Great Britain.

On April 10, Morgan enters another new realm. He is the guest of honour for “The Sounds of Orange Street Virtual”, a free streaming event that recognises his 81st birthday which he celebrated on March 27.

The show is based on The Sounds of Orange Street, a compilation album of some of Morgan’s biggest hits which was released in December 2020. He is expected to do a cameo for his first virtual performance. 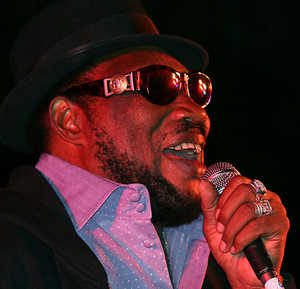 Morgan, who toured steadily prior to the Coronavirus lockdown, gives virtual gigs the thumbs-up.

“It’s good, yuh nuh. Di artistes not getting di money dat they should if they were going out to do shows, but I think a lot of dem enjoy performing from a studio an’ people enjoying themselves at home,” he said.

Speaking from his home in Miami, Morgan said the event is even more significant given the recent deaths of reggae legends Toots Hibbert, producer Bunny Lee (his brother-in-law), Albert Griffiths, U Roy, and Bunny Wailer.

Of the artistes, he was particularly close to Toots, who succumbed to complications from the Coronavirus last September at age 77. They were born in Clarendon parish, central Jamaica, and both recorded a number of hit songs for producer Leslie Kong.

In fact, Morgan says it was he who auditioned Toots when he first went to Kong’s Beverley’s Records at Orange Street in Kingston in the early 1960s.

“I didn’t like his song an’ turned him down, an’ then he went away to (Prince) Buster an’ did songs which became a big hit. I look at Leslie Kong an’ sey, ‘mi turn down a good singer’,” he recalled.

Though his initial recordings (like Loverboy aka S Corner Rock) were for Duke Reid, Morgan’s most fruitful partnership was with Leslie Kong, a Chinese-Jamaican who recorded Bob Marley and Cliff’s first songs. Blazing Fire and the independence anthem, Forward March, are just two of the classics he cut for Kong whom he described as “a great guy, very creative”.

His work for Kong has made Morgan a popular club and festival draw in Europe, especially the United Kingdom where ska retains a strong underground following.

These days, Morgan divides his time between Clarendon and South Florida. His son Merrick oversees his extensive catalogue which includes Mountain Climber, a self-produced EP that came out last July.