As uncertainty surrounds the future of major reggae festivals in Europe and North America, Freddie McGregor is looking to stage the second edition of his Big Ship Music Fest.

McGregor, who usually performs at festivals on both sides of the Atlantic, first held Big Ship Music Fest in July 2019 at the same venue with acts including Everton Blender, Admiral Tibet, and Hopeton Lindo. 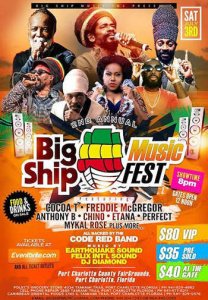 Last year’s show was cancelled due to the Coronavirus. But McGregor is determined to get back in the reckoning, pointing out that Florida is “an open state” when it comes to returning to business.

“This is something I want to continue. Last year, we never did it because of the pandemic situation but we’re hoping to do it next year and other years to come. It’s like a festival, you need to start somewhere,” he said.

Michael Rose, Anthony B, Cocoa Tea, Etana, Chino, and Perfect Giddimani are confirmed for the Big Ship Music Fest, which will be held during the July 4 Independence celebrations, one of the biggest holiday periods in the United States.

Tickets went on sale in March, and already anticipation is encouraging for a strong turnout. With fans understandably hungry for live music, McGregor says the show’s cast has been booked for three dates in Texas in August.

Europe has also shown interest but he and his team have adapted a wait-and-see approach for that region which hosts major festivals like Rototom Sunsplash in Spain, Summerjam in Germany, and Reggae Geel in Belgium.

Those events were cancelled in 2020 as the Coronavirus ravaged Europe. There has been little information about a return this year for any of them.

“We are getting feedback from Europe because people are asking us if we are taking this package to Europe. At the moment, we can’t say yes; because of the whole pandemic and government situation we are not sure about the arrangements going into the summer, so we are just playing it by ear,” McGregor explained.

Though songs such as Big Ship, Just Don’t Want to be Lonely, and Prophecy have made him one of reggae’s most successful artistes of the past 35 years, Freddie McGregor has done well-promoting shows in Florida, where he lives, and California.