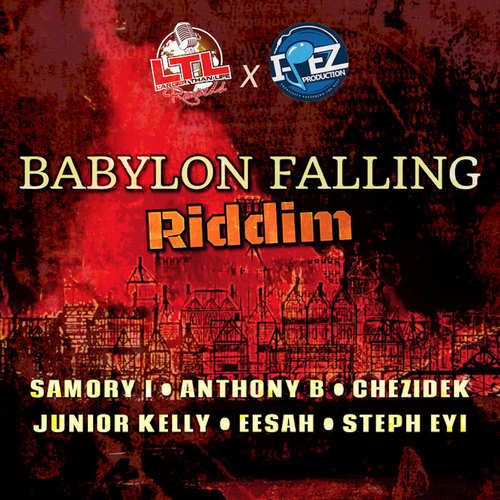 Larger Than Life Records and I Pez Production have teamed up on a new project titled the Babylon Falling Riddim. Officially released on June 18, 2021, the project took roughly five months to be completed.

“This riddim is full of cultural vibes with a diverse lineup – from iconic to up and coming artistes,” Larger Than Life producer Tosh described.

“It’s always a blessing to feature such artistes whom in the past I’ve been a fan of before even sitting in the producer’s chair,” the producer expressed. Working with I Pez Production producer Andres Lopez came naturally after years of the producers knowing each other.

“Lopez and I met a few years ago as he worked on the road with the same band my wife sang with. Spending some time with him, I could sense he had a production style that was similar to that of Larger Than Life Records. After hearing several of his “beats,” we knew that it was only a matter of time until we would come together and create some great works. The links come naturally through the intertwining of the music circuit,” he elaborated.

Based in Boston, Massachusetts in the USA, Tosh has been in the producer’s chair for the past 15 years. With a style described as strictly roots and culture, past productions include Going Home Riddim, Hungry Dayz Riddim, Come Together Riddim, and Queen of Queens Riddim. With this new project, his hope is to spread the love of positive music to the people, especially in a tough time for many with the ongoing global pandemic.

“The only thing COVID has done is make the work seem more important to spread the message of peace, love, and unity to the people. It has only pushed us harder to make positivity of all the negativity it came at us with,” Tosh stated.

In the pipeline, expect several more collaborative projects between the two labels that are soon to be released.

“Right now I’m just giving thanks for the years and years of continuous support to the artistes, producers, media personnel, selectors, family and fans! I’m forever grateful and blessed, much more to come,” he expressed.

Listen to the Tracks