At 73 years-old, Cedric Myton not only wears silver, shoulder-length locks as a conviction to his Rastafarian faith. They are a badge of honour for years of unyielding service to reggae.

A founding member of The Tartans, The Royal Rasses and The Congos, Myton’s unique falsetto has helped make songs like Humanity (by The Royal Rasses) and Fisherman (by The Congos) classics. His latest album, Reggae On Top, was recently released by Montego Records.

Approaching his 74th birthday, the chatty Myton’s lean frame belies his advancing years, thanks to regular jogs on the beach in his beloved Old Harbour Bay, a community just outside of Kingston, known for its expansive fishing village. 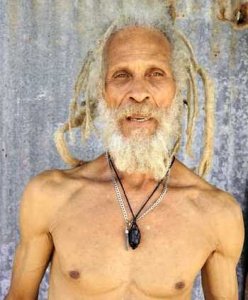 He never tires of recording fresh songs which he says “renews di spirit”.

“It’s very important because music is di real revolutionary. It’s di number one platform to express yourself,” he reasoned.

Before Covid-19 struck, Myton kept busy touring with Inna de Yard, a collective that also comprises Kiddus I (of Rockers fame), Winston McAnuff and Ken Boothe. They are featured in ‘Inna de Yard: The Soul of Jamaica’, a documentary in which several veteran and upcoming reggae artistes are featured.

‘The Soul of Jamaica’ is directed by Peter Webber, the Academy Award-winning British film-maker.

As main acts in the project, Myton, Kiddus I, and McAnuff have done the promotional rounds at film festivals in Asia, Europe and Australia. At each stop, they are treated as celebrities, similar to the Afro-Cuban musicians whose careers were revived in The Buena Vista Social Club, the sensational 1999 documentary.

“It open me to di world, it’s universal! It’s (the documentary) all over,” said Myton.

Fisherman is part of the documentary’s soundtrack. So too Youth Man, another roots standard he cut with The Congos, which also includes co-founder Ashanti Roy.

Both singles were done in the late 1970s when roots reggae was still popular. Fisherman is the lead single from Heart of The Congos, the outstanding 1977 album produced by Lee “Scratch” Perry; Youth Man is from Congo Ashanti, a 1979 album the group did for CBS Records.

Myton hails from Old Harbour Bay in St. Catherine parish, where his family have lived for over a century. His career actually started with a group called The Bell Stars in the late 1960s, followed by a stint with The Tartans who had a hit song with Dance All Night.

His next assignment was with The Royal Rasses whose ranks included a talented singer/songwriter named (Prince) Lincoln Thompson. They are best known for Humanity, an enduring song that has been covered or sampled by high-profile artistes including Grammy winner John Legend.

Myton has done his share of tours with The Congos and as a solo act. In whatever capacity, whenever he hits the stage fans call for the hits, especially Fisherman.

“It’s di people’s favourite song, every show wi have do it. Fisherman is a great song but Youth Man is also a great song,” he noted.

His sessions with Montego Records are just a tip of the iceberg in terms of new or unreleased material. Myton reckons he has hundreds of songs in his vault.

“We have a lotta stuff for di people to hear. A lot of dem are cultural stuff ‘cause dat’s what people want now more than ever,” he said.