Every reggae artist who visits Jamaica hopes for a little magic to rub off on them. Big Mountain are no different. Best known for the 1994 hit, Baby I Love Your Way, the California band is currently in Kingston where they completed sessions for Freedom, their upcoming album.

The 12-song set, their first in five years, was recorded at Anchor studios in the Jamaican capital. It is produced by Delroy Pottinger, a senior engineer at that facility for many years. 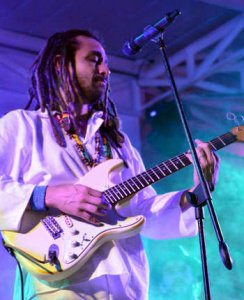 According to Quino McWhinney, founding member, guitarist, and vocalist with the six-piece band, working in Jamaica brought him and his colleagues renewed energy.

“There’s something so natural about recording here. The songs have a real roots Jamaican feel to them,” he said.

Love is Your Culture is Freedom‘s proposed lead single. There is also a cover of The Eagles’ 1977 classic, Hotel California. It was another cover song that put Big Mountain on the international map 27 years ago. Baby I Love Your Way was originally a massive hit for Peter Frampton in 1975; their reggae take jumped into the Top 10 of the Billboard pop chart and pushed Unity, their third album, to gold status for over 500,000 in sales.

Though they never repeated that commercial success, Big Mountain set the pace for the current wave of reggae bands out of Southern California like Rebelution and Stick Figure. They also maintain a loyal fan base in Hawaii, Asia, the United States west coast and parts of Europe. Following a July 24 listening party for Freedom in Kingston, the band heads to the United Kingdom in August for a handful of shows. The final of those is the Bath Reggae Festival on August 21 alongside Maxi Priest, Aswad, Dawn Penn and Sister Nancy. Big Mountain are scheduled to perform in Ghana in September.