Once the hub for Jamaica’s thriving banana industry, Port Maria in St. Mary parish is a scenic seaside town where the original members of Link & Chain first learned about Rastafari and music.

It’s been a long time since those early days. Thirty-five years to be exact. Link & Chain still flies the Rasta banner, and proudly.

The quartet has released two songs to date in 2021 – Ready and Don’t Do That. They precede a proposed album that will help celebrate their latest milestone.

Dwight Campbell, one of its three original members, spoke recently of what has kept Link & Chain together for almost 40 years.

“I can’t pinpoint a specific reason, but we all love music and wanted to sing like older siblings and friends in our community. (We have) Maximum respect for each other. Brotherly love, a strong commitment and dedication to the struggle,” he said. 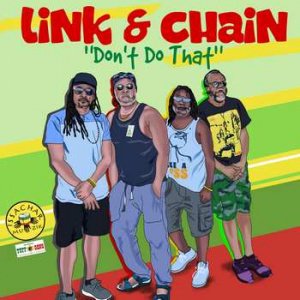 Lead singer Paul Williams and Trevor Douglas are the other co-founders of Link & Chain. Oniel Griffiths, who recently joined, completes the line-up.

The upcoming album will be their third. New Day, their first, was produced by Lawrence “Jack Ruby” Lindo and released in 1989 by RAS Records, months after his death.

Campbell, who lives in South Florida, describes the new album as, “Very roots and culture. It’s gonna have a variety of writing.”

Some of the musicians they worked with include guitarist Ian ‘Beezy’ Coleman and bassist Devon Bradshaw. Coleman toured for many years with Ziggy Marley & The Melody Makers and Stephen Marley, while Bradshaw is known for stints with Burning Spear and Garnet Silk.

Some of Link & Chain’s biggest influences are rock steady giants like The Paragons, The Heptones, The Melodians and Alton Ellis. In terms of reggae, they point to Toots And The Maytals, Jimmy Cliff and Foundation.

It was Foundation, another roots group from St. Mary, who introduced them to Jack Ruby, famous for producing Burning Spear’s seminal Marcus Garvey album.

“We all rehearsed at the same location in the hills of St. Mary… Jack and Prof I, would stop by to listen to Foundation’s progression because they had a deal with Island (Records). We were a young group at the time when we got introduced to him and he was impressed with what he heard,” is Campbell’s recollection of Link & Chain’s initial meeting with the producer. “It was a good feeling to know that a legend was giving us encouragement, and that helped made us who we are today.”

Unlike Foundation and other roots-reggae groups, Link & Chain have never done extensive overseas tours. However, Campbell, Douglas and Williams never stopped writing and recording which resulted in singles and the EP, Fix The Roof, which came out in 2015.

Link & Chain plans to issue more singles prior to the release of their next album.