Because of its close coastal proximity, Norwalk, Connecticut is renown for aquatic activities. The city is also headquarters to major companies like Xerox and Pepperidge Farms, and home to roots-reggae artist Eric Smith.

A resident of Connecticut since the late 1980s, the Jamaican singer has made a name on the New England state’s reggae scene which he describes as, “Very active”. He added that, “Most of the top reggae artistes from Jamaica come and do shows here.”

Born in Kingston, Smith retains the hardcore roots sounds he heard as a youth in Papine, a working-class community where he lived prior to migration.

“My inspiration comes from Jah Almighty. After the deaths of Bob Marley and Jacob Miller, Black Uhuru inspired me with the sound of Mykal Rose. His way of singing really moved me,” said Smith. 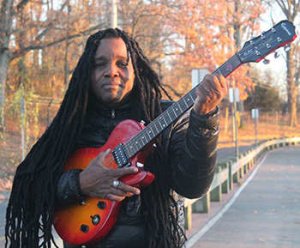 The militant, unique sound that brought Rose and Black Uhuru  a Grammy and international success in the 1980s is evident on Police Brutality and Alien, Smith’s latest songs that address two hot-button topics in the US.

Smith was moved to write and record the songs following a series of controversial incidents involving police and blacks in the US, as well as rising aggression against immigrants there.

“Racial turmoil and police conflict have been in America since day one. It is rampant…though you might not hear about it.. it is happening every day. One has to be careful wherever he/she goes,” he stressed.

As the holder of a “Alien card”, he believed it was relevant to address these issues in a song. Working with Smith on Alien is saxophonist Dean Fraser, and American guitarist Andy Bassford, known to Jamaican fans for his stint with Lloyd Parks and We The People Band.

Police Brutality features the patented rhythms of Sly and Robbie who fashioned the famed Black Uhuru sound. Both songs are produced by Delroy “Fatta” Pottinger.

Smith is quick to point out that Police Brutality was also inspired by the high level of questionable shootings by Jamaican law enforcement. Though he lives in Connecticut, he keeps in touch with developments back home.

“Absolutely! I always need and want to know what’s going on in my own country. What kind of reform or changes are being made…the crime situation…the suffering of the people…I do this all through social media,” he stated.

Eric Smith has one album to his credit. That set, Rocky Road, was released in 2007.