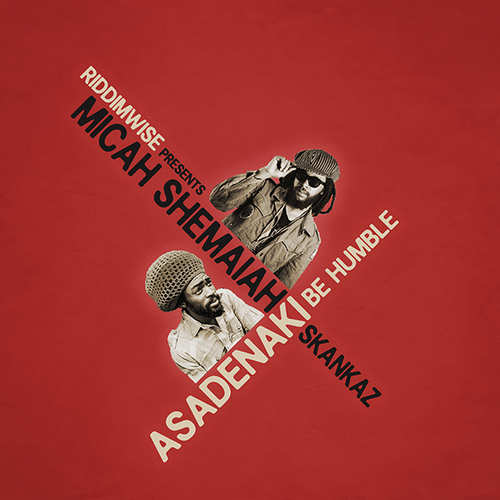 The new release by Riddim Wise can be described as authentic Rub-A-Dub. The mini EP entitled Micah Shemaiah Meets Asadenaki sees the two Jamaican artists riding the riddim. The EP, with the vocal cuts Skankaz and Be Humble, also includes 2 dubs for those who feel like making they’re own version or just enjoy rocking to some instrumental music.

Micah Shemaiah grew up with the spiritual teachings of Rastafari as a member of the Twelve Tribes of Israel. His career has been going strong for many years now, touring in Europe as well as releasing two solo albums and many singles and collaborations.

Asadenaki was born and raised in Kingston 20 at the historic house of Solomonic Productions, “Naki” is one of reggae music’s emerging gems, continuing a rich musical legacy he inherited from his father, the Hon. Bunny Wailer, original member of Bob Marley & The Wailers.

Riddim Wise is a Canadian duo that has been on the music scene for over 20 years now, releasing project like The Downtown Riddim, The Empire Riddim, Marky Lyrical’s Stardust album, and many singles and collaborations with artists such as Sizzla, Iba Mahr, Anthony B, Lutan Fyah, and Luciano just to name a few.