Rasta and Africa have always had special meaning for Mikal Asher. They are dominant on Unchained, his third album which was released September 21 by VP Records.

The set has 13 songs most of which are produced by Ronald Butler, a veteran guitarist whose credits include session work with The Wailers, The Meditations, Israel Vibration and Anthony B. Two of Unchained‘s songs are produced by Gary Davis of Chocolate Star Records who is responsible for Starting All Over, Asher’s first song from 1994.

Unchained is released 20 years after Armageddon, Mikal Asher’s second album. His first, Binghiman, came out in 1999. Shortly after the album was completed, he and his older brother Denroy Morgan sat and listened to it. Morgan, best known for the song I’ll do Anything For You and patriarch of Grammy-winning band Morgan Heritage, was impressed. “Him sey, ‘Asher, it have a Twelve Tribes sound. It sound organic’. I feel good about that, ’cause it’s who we are,” said Asher. 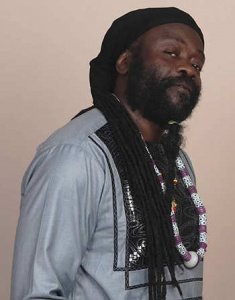 Several of the songs on Unchained reflect the singer’s commitment to his faith and the Motherland. They include Footsteps of Jah, African Spirit, Real Rastaman, and Binghiman. Asher shows a different side on the ballad, Never Meant To.

A member of the Twelve Tribes of Israel since 1982, he was drawn to the organisation’s policy of black empowerment and repatriation to Africa.

In the mid 1990s, he lived in West Africa, settling in Ghana and the Ivory Coast (now Coite D’Ivoire) where he recorded songs and helped establish vibrant reggae colonies. It was while living in Africa that Binghiman was conceived and recorded. The album is one of Mikal Asher’s career highlights.

“When I think of all the work that I have done In Ghana and Ivory Coast, spreading the gospel of reggae music with that positive message. When I hear what people in Africa said about the impact that I had on their lives. When they tell me stories of things I did, things I don’t even remember, I myself am amazed,” he said. “When the number one radio presenter says on his programme that Binghiman inspired him to do what he is doing now, that’s when I realise I have been doing my part to continue the legacy of our parents.”

Mikal Asher’s parents raised him and Denroy Morgan in Clarendon parish in central Jamaica. That area produced a number of great reggae acts including Toots Hibbert, The Clarendonians, Freddie McGregor, and Barrington Levy. While he followed the musical progress of Denroy and his children, it was not until the 1990s that Asher launched his career. Binghiman and Armageddon were well-received but not long after the latter’s release, he began serving a seven-year prison sentence in the United States.

Unchained is the most comprehensive project since his release 13 years ago. Asher considers it manifestation of a dream his mother had many years ago. “My mother said she had a vision that God told her that one day her family will grow to be a nation that stands for the righteousness of God. We have done a lot to shine our light to the world through our music and I know we have a lot more work to do,” he said.