Hard to believe, but Dennis Brown was considered a has-been by many Jamaican fans in the mid-1980s. The Crown Prince of Reggae, a man seen as the heir to Bob Marley’s throne, was in a slump.

But in 1987, a hit-laden lovers rock album revived his flagging fortunes. That album was Inseparable, produced by Willie Lindo.

The set was recently re-released on vinyl. Five-hundred copies came out in October courtesy of Lindo’s Heavy Beat Records and LTK20 Records, owned by Lindel Thompson.

Both men, based in South Florida, agreed that with vinyl enjoying a global revival, it is an opportune time to release one of Brown’s finest works. 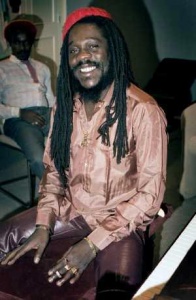 With songs like the jazzy title, Since I’ve Been Loving You, For You, So Nice to be With You, and Stop Fighting, Inseparable was an instant smash. The set returned Brown, who had been making hit songs since the late 1960s, to the charts in a big way.

Michael Barnett, a Disc Jockey at Kool 97 FM in Kingston, worked in the New York City reggae industry for many years before returning to Jamaica 39 years ago. A Dennis Brown fan, he gives Inseparable high marks

“It would place close to the top of his album list due to the excellent lyrical content, tremendous musicians, and top-quality production. ‘Inseparable’ and ‘For You’ are two of my all-time favourite Dennis Brown love songs,” said Barnett. “‘Stop Fighting’ was a big number one off the album which brought Dennis right back into the public’s view after a few years of no recordings.”

Dennis Brown had recorded numerous hits since his debut in 1968 with producer Derrick Harriot on Lips Of Wine. There were even bigger follow-ups for Clement Dodd (No Man Is An Island, If I Follow My Heart), Niney Holness (Westbound Train, Cassandra), and a series of chart-toppers for Joe Gibbs including Money In My Pocket), How Could I Leave, Should I, and the lush Love Has Found Its Way.

Lindo, who played on many of the Joe Gibbs productions, remembers a gaunt Brown visiting him with his manager Horace Campbell in 1986. His vocals were rough which prompted the producer to advise Campbell to let him rest and bring him back three months later.

The break did the world of good for Brown as the recording sessions in Manhattan, New York went like clockwork. Lindo on guitar, Keith Sterling (keyboards), Dean Fraser (saxophone), and Nambo Robinson on trombone were the main musicians on Inseparable.

As the album took off, the astute Barnett reminded Brown of an idea he pitched to him in 1980 of him starring a cabaret-type show. It would be based on the album in which the singer would select special guest performers.

Brown agreed and Inseparable the show was born in 1988. It ran for four years in Kingston, Ocho Rios, Montego Bay, Negril, and Mandeville and featured Brown alongside close friends such as Gregory Isaacs, Freddie McGregor, and John Holt.

It completed a remarkable comeback for one of reggae’s most gifted artistes.

“When Dennis put out the ‘Inseparable’ album in 1987, I felt the time was right. I called him in London and reminded him about the concept, and told him I would call the show ‘Inseparable… Dennis Brown & Friends In Concert’, because he would choose the two guests, who should be friends of his. He was excited about the show’s concept now and the opportunity to promote the album,” Barnett recalled.

Dennis Brown continued to perform songs from Inseparable in his live show until his death at age 42 in July, 1999.

So Nice To Be With You

Since I’ve Been Loving You