Keith Hudson, a producer and vocalist with boundless talent

Dubbed the ‘Dark Prince of Reggae’, Keith Hudson’s penchant for experimenting earned him that ominous title. As a producer and vocalist, he made his mark as one of the music’s mystery men.

On October 22, the VP Music Group reissued Flesh Of My Skin, Blood Of My Blood, a 1974 album considered Hudson’s masterpiece. The 14-song set (it contains three versions) is out on compact disc, vinyl and for the first time, digitally.

KEITH HUDSON, A PRODUCER AND VOCALIST WITH BOUNDLESS TALENT

It hears Hudson — who died in 1984 at age 38 — at the peak of his creative powers, working with some of Jamaica’s best musicians, including drummer Santa Davis, bassist George “Fully” Fullwood, and guitarists Earl “Chinna” Smith and Tony Chin of the Soul Syndicate Band.

Carter Van Pelt, director of catalogue development at VP, addressed the significance of re-releasing Flesh Of My Flesh And Blood Of My Blood. 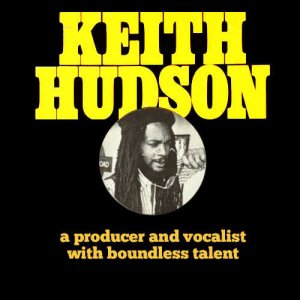 “If you study the case of Keith Hudson, he was very deliberate in making reggae that didn’t sound like anything else coming out of Kingston back then. For example, in the early ’70s, you could hardly find a reggae song without drums. On ‘Fight Your Revolution’, from ‘Flesh Of My Skin’, the arrangement is just guitars and a vocal chant with a harmonic chorus, and it’s brilliant. On other tracks, he uses sound effects and different approaches to percussion, and the album is thoughtfully sequenced for the LP format, with an A side and a B side that are distinct,” he explained.

Van Pelt added that “Another example of Hudson’s creativity, though not from Flesh Of My Flesh, is his production of Delroy Wilson called ‘Place In Africa’. This is a reggae styling of ‘House Of The Rising Sun’, but the keys to the arrangement are in the big psychedelic guitar chords washing over the whole mix like a Tsunami, which was not what anyone was doing in Jamaica at the time. I think you still have artiste/producers in Jamaica who do things differently, and that adventurous spirit will be rewarded. Off the top of my head, I think of Tessellated in terms of the outsider approach, who is pushing different stylistic and sonic boundaries and finding his own audience. It’s the same mentality of a Keith Hudson, even if the music sounds dissimilar.”

Hudson was from West Kingston, which has a rich music legacy and just as notorious history of gang violence. The two intertwined and Keith Hudson called on his experience as a ghetto youth to colour the music he made.

A so-called ‘ghetto dentist’ (he was reportedly a dental assistant), Hudson began producing music in the late 1960s; Shades Of Hudson by Dennis Alcapone is reputedly his debut release.

In the 1970s with reggae on the verge of an international breakthrough, he produced a number of outstanding songs including Old Fashioned Way by Ken Boothe, and S90 Skank by Big Youth.

Flesh Of My Flesh, Blood Of My Blood is one of Hudson’s initial projects as a vocalist and was recorded and released in the United Kingdom where he had moved to in 1974. That year, Pick A Dub, his sensational dub album was also released.

Hudson eventually settled in New York City and continued his dual career as singer/producer. When he died from lung cancer in November 1984 Jamaican music was veering from Rasta and roots-reggae to slackness and dancehall.

Flesh Of My Flesh, Blood Of My Blood was reissued by German company, Basic Channel in 2004. With its availability on digital formats, Van Pelt is excited that a new generation of socially-aware fans will discover the boundless talent of Keith Hudson.

“In terms of relevance, I think Hudson’s overtly pro-black, pan-African sentiment still resonates in the era of Black Lives Matter. He was deeply influenced by Frantz Fanon and the many Caribbean intellectuals of the time, and that comes across very strongly on ‘Flesh Of My Skin’,” he said.