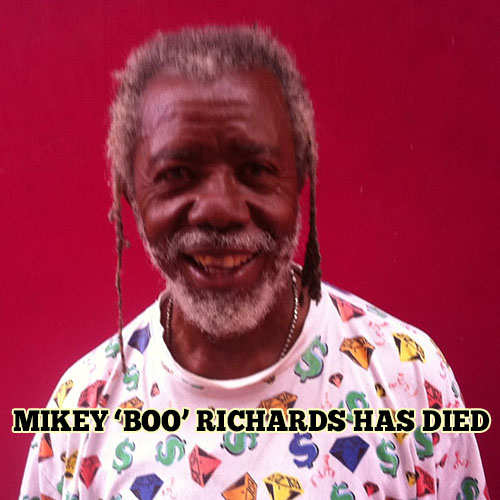 Jonestown, Kingston-born Mikey ‘Boo’ Richards, son of Latin and Jazz drummer Leonard Richards, was a regular member of bands such as In Crowd, Now Generation and 809. His first studio work was at Studio One where he was played on John Holt’s A Love I Can Feel. It was followed by playing on The Slickers’ Johnny Too Bad at Dynamics, a song which was featured on the soundtrack for the 1972 Jimmy Cliff film, The Harder They Come. He then went on to play on dozens and dozens of recording sessions and was involved in some of the greatest hits like Lorna Bennett’s Breakfast In Bed, Dennis Brown’s Silhouettes, Ernie Smith’s Life Is Just For Living, and countless others for Beres Hammond, The Abyssinians, Ken Boothe, and other well-known reggae artists.

Mikey ‘Boo’ Richards’ drumming can be heard on albums such as Joe Higgs’ Life Of Contradiction, Max Romeo’s Revelation Time, Ernest Ranglin’s Ranglin Root, The Congos’ Heart Of The Congos, Lee ‘Scratch’ Perry’s Super Ape, I Kong’s The Way It Is, The Heptones’ Party Time. Bob Marley & The Wailers’ Survival, and on three Culture albums, to name only a few. Famous reggae keyboardist Robbie Lyn calls him “Unsung legend. One of the greatest session reggae drummers of all time dating back to the 1970s.”, while guitarist Andy Bassford says that “he was an amazing musician… quantized, balanced, and EQed at birth. Showed up at sessions with TWO STICKS. Nothing else. Because he never broke any.”

John Holt – A Love I Can Feel

The Slickers – Johnny Too Bad