Three classic albums produced by Sly & Robbie, originally released in Jamaica in 1979, 1980, and 1984 respectively, have been reissued on CD and LP for the umpteenth time, but now on the Jamaican riddim twins’ own Taxi label.

First, there’s Black Uhuru’s Showcase, a classic 1979 roots album containing some of Black Uhuru’s early singles in a showcase format. The album now comes with its original JA front cover. Tracks include such classics as Leaving To Zion, General Penitentiary, Guess Who’s Coming To Dinner, Shine Eye, and Plastic Smile, all extended into dubwise. The album, with Sly & Robbie on majestic form, was also later reissued under the titles Black Uhuru and Guess Who’s Coming To Dinner by record labels in Europe and the US respectively. 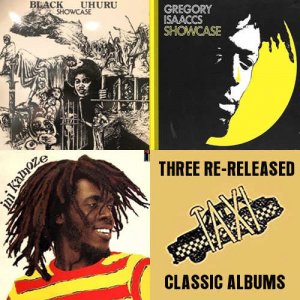 And then there’s Gregory Isaacs’ classic 1980 album Showcase. This set includes such killers as Soon Forward, Motherless Children, a wicked cover of Marley’s Slave Driver, and Going Down Town, all replete with dubs, discomix stylee! The album contains perfectly crafted songs and precise riddim construction by the Taxi Gang. Each song drifts seamlessly into percussive dubs with subtle sonic landscapes sculpted by engineers Maxie & Ernest Hookim at the mixing board in Channel One Studio. The CD features the bonus track I’m Coming Home.

Last but not least, also Ini Kamoze’s essential self-titled mini-album is back in the racks. All tracks of this 1983 heavy, real and authentic showcase album merge into dubs mixed by Paul ‘Groucho’ Smykle and Stephen Street at Island’s Fallout Shelter studio. The riddims and vocals were originally laid at Channel One Studio in Kingston with Solgie at the board and producers/musicians Sly & Robbie on drums and bass, assisted by guitarist Willie Lindo with Robbie Lyn on keys. The album contains the classic World A Music which Damian ‘Jr Gong’ Marley fans will certainly recognise as its riddim was relicked for the killer piece Welcome To Jamrock a few years back, and General which spawned a number of tough versions for Philip ‘Fatis’ Burrell’s Xterminator label back in the late 1990s.