Women and Resistance in the Early Rastafari Movement | New Book 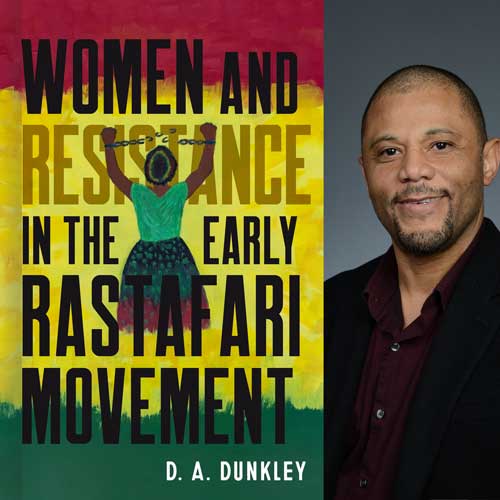 NEW BOOK
Women and Resistance in the Early Rastafari Movement

Women and Resistance in the Early Rastafari Movement is a pioneering study of women’s resistance in the emergent Rastafari movement in colonial Jamaica, written by D. A. Dunkley.
The writer is associate professor of history in the Department of Black Studies at the University of Missouri.

As D. A. Dunkley demonstrates, Rastafari women had to contend not only with the various attempts made by the government and nonmembers to suppress the movement, but also with oppression and silencing from among their own ranks. Dunkley examines the lives and experiences of a group of Rastafari women between the movement’s inception in the 1930s and Jamaica’s independence from Britain in the 1960s, uncovering their sense of agency and resistance against both male domination and societal opposition to their Rastafari identity. Countering many years of scholarship that privilege the stories of Rastafari men, Women and Resistance in the Early Rastafari Movement reclaims the voices and narratives of early Rastafari women in the history of the Black liberation struggle.

“Dunkley skillfully and meticulously draws on a range of sources, such as the colonial archives and theoretical frameworks, such as Womanism to tell the overlooked story of Rastafari women and their role in challenging colonialism, patriarchy, and other forms of oppression. By foregrounding women’s role as active agents, this rich and provocative narrative challenges the perception of early Rastafari women as submissive docile subjects. Indeed, at the inception of the movement, women were instrumental in the introduction of philosophies necessary for the liberation of Black people. Caribbean, and by extension women’s history, will be enriched by the most in-depth exploration to date of Rastafari women.”
Karen Flynn, author of Moving beyond Borders: A History of Black Canadian and Caribbean Women in the Diaspora

“Dunkley shatters the cliché of the submissive early Rastafari woman. He draws from archival sources and testimonies to bring back to life the women whose contribution was so vital to the development of the Rastafari movement in the first three decades of its history…. This book is an immersion in the complex history of the agency of Black women.”
Hélène Lee, author of The First Rasta: Leonard Howell and the Rise of Rastafarianism

“Dunkley’s masterful use of archival documents definitively situates early Rastafari Woman as leaders and partners in developing Rastafari. Leveraging histories of Pinnacle, Kemps Hill, Bethel, Beulah, and the judiciary of the colonial government, Dunkley argues that early sistren’s organizing was critical to fighting sexism and racism in the anticolonial struggle against British rule and Creole nationalism in early to mid-20th-century Jamaica.”
Shamara Wyllie Alhassan, author of Re-Membering the Maternal Goddess: Rastafari Women’s Intellectual History and Activism in the Pan-African World

“In this groundbreaking book, Daive Dunkley forces a rethinking of the common view of Rastafari as fundamentally patriarchal. Drawing on previously neglected oral sources and interrogating and reinterpreting the earliest written documentation, he succeeds in recovering the voices and acts of some of the unheralded women who helped conceive one of the 20th century’s most formidable and creative anticolonial movements.”
Kenneth M. Bilby, author of True-Born Maroons

“A well-executed use of the historical/biography method which describes clearly the oppression experienced by these women. An oppression deliberately meted out by socio-political realities of the period. Particularly interesting is the Womanist perspective/theology lived by the early Rastafari woman, a position which still impacts the movement today. Dunkley appreciates the guiding principle of religion as the overarching aspect of Rastafari Livity. For the Rastafari woman of the period the challenge was to emphasize equality and unity rather than obedience and deference, thus modelling the life of Empress Menen and H.I.M. Haile Selassie I. A truly rebellious action.”
Eleanor Wint, author of Marcus Teaches Us