‘The Reggae Nation’ honours the memory and legacy of Bob Marley

A road warrior in every sense of the term, Bob Marley and his Wailers band toured relentlessly during the 1970s. Their extensive dates helped make them and reggae a global phenomenon.

Dutch author Martijn Huisman tracks their international impact in ‘The Reggae Nation: The Global Legacy of The Wailers,’ his first book which was released in September 2021.

‘THE REGGAE NATION’ HONOURS THE MEMORY AND LEGACY OF BOB MARLEY

Part coffee table/travel guide, ‘The Reggae Nation’ visits countries the reggae legend visited, as well as remote areas in Asia and Latin America where his songs inspired some of the 20th Century’s defining moments. 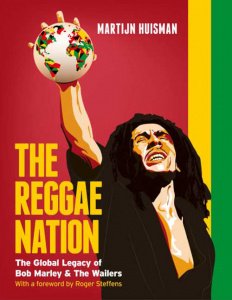 “In a general sense, the book shows how Bob Marley And The Wailers coloured the planet red, gold, and green with their reggae anthems. They paved the way for reggae and Rastafari and turned the former into a global sound and contributed to the latter becoming a worldwide movement,” said Huisman. “The stories in the book originate in a great score of countries, communities, and languages, all illustrating how reggae has become a global sound which is created, played, and celebrated around the globe. It is the ultimate evidence of how Jamaica’s reggae stars, spearheaded by Bob Marley And The Wailers, have successfully brought the music and the message to all corners of the world.”

An educator by profession, Huisman studied journalism at the University of Erasmus in his hometown in The Netherlands. While a student at Erasmus in 2010, he wrote ‘Babylon by Bus’ which revisits Marley And The Wailers’ concerts in that country in 1976.

‘The Reggae Nation’ is an expansive work with 432 pages and a flood of photographs. It took Huisman a decade to complete.

“I have spent countless hours on the project, really a lot of my free time throughout the years. But it was all more than worth it, as my passion for and devotion to the music and culture kept me going. The music kept the fire burning and the book progressing, slowly but surely,” he said.

Readers get an in-depth look at Marley’s groundbreaking tours of Japan and Australia/New Zealand in 1979. But there is also coverage of how his rebel songs inspired people in countries he never visited, such as the Sandinistas in Nicaragua and protests in Tianamen Square, China.

Huisman provides similar dossiers on countries like Cuba and Indonesia which were virgin territory when Marley And The Wailers were at the peak of their touring powers.

‘The Reggae Nation’ was released 40 years after Marley’s death (in May, 1981 at age 36). For Martijn Huisman, the objective was to capture his enduring legacy.

“The most satisfying part of the project is to have obtained a deep understanding of what Bob Marley And The Wailers, and in a broader sense reggae and Rastafari, have meant and continue to mean for people around the globe. Musically, of course, but also socially, culturally, politically, on a religious level,” he reasoned. “Of course, when you work on a project for 10 years, it is also immensely satisfying to hold the fruit of your own creation and efforts in your hands; a beautiful hardcover book.”