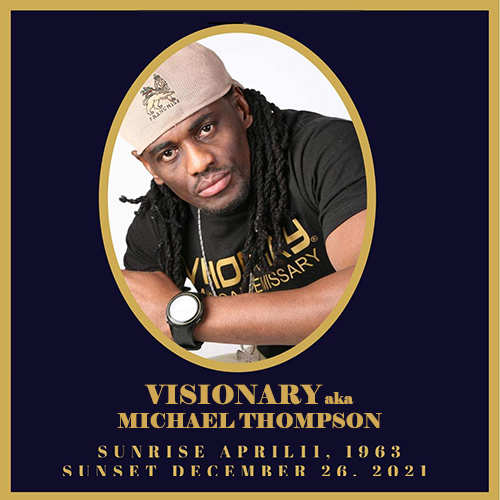 Reggae singer, songwriter, musician & author Visionary aka Michael Thompson has passed away on Sunday, December 26th at a hospital in Canada, after shortly suffering from a Covid infection.

His primary love has always been singing and as such has focused on his artistry as a Reggae artist, who has grown from his original background in Gospel and R&B music. Having knowledge of these various types of music has given him the musical tools to cultivate his own unique vocal sound. Visionary’s musical prowess remains true to his name as he continues to receive clear, distinct, and specific insights for the future and presents them masterfully in his songs.

Visionary, a native of St. Catherine, Jamaica hailing from the district of High Gate, attended Edna Manley College for Visual & Performing Arts, where he earned a music scholarship to attend Temple University in the US. During this time Visionary strengthened the technical aspect of his artistry by focusing on piano and vocal studies. Canada was the next destination for the aspiring artist’s rising career, where he immigrated in the 1990s to further his musical journey, continually writing and recording his original songs.

Visionary’s 2007 debut album titled Brace Yourself was produced by Studio One legend Willi Williams. In 2014, Vision for Life Productions released a 14-track Official Studio One Tribute album entitled Grassroots of which Visionary stated, “I consider it a great honor and privilege to be asked by veteran sound system owner Mr. Victor ‘Tipper’ Henry, of Tipper Tone Music to embark on this great project in tribute of Studio One.

In between writing and singing uplifting music, Visionary has also written an eye-opening and intriguing book, The Hidden Agenda of Reggae Music. Never in the history of books about Reggae music and its movements has anyone ever described the blatant truth without sugar-coating its activities.