Since exploding on the music scene in 2005, the Jamaican-born Konshens has become one of the superstars in Dancehall, Reggae, and Global music. Having worked with the likes of Chris Brown, Cardi B, Doja Cat, Major Lazer, Chainsmokers, Sean Paul, Rick Ross, Nipsey Hussle, Ty Dolla Sign, E40, Enrique Iglesias, Rvssian, Nicky Jam, Farruko, and many more, there is no genre and musical styles off limits to this proven hitmaker. International smash hits like Bruk Off and 2017’s Turn Me On, to name a few, have helped Konshens drive towards his goal of elevating Dancehall and Jamaican music to a truly global level and acceptance worldwide. 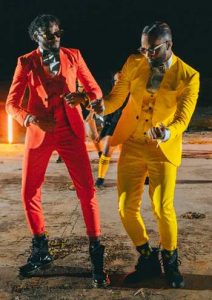 Konshens has teamed up with rising artist Kemar Highcon to record an infectious combination tune called Volcano. The single produced by Track Starr is accompanied by a hot music video. With Konshens’ ever-growing popularity and Kemar Highcon aka the Sauce Boss becoming a fixture on the scene, the energy on the set was very dynamic, and it shows. They played to their strengths in showcasing the visuals as the two Jamaican men are dressed to the nines and casually flex while turning up the heat.

The opening shot shows a popular hot spot called Janga’s Soundbar in Kingston, JA. The open-air space and laid-back vibe set the tone for the party to unfold. The fellas enjoy a good time and keep the libations flowing as the spot a vixen makes eyes. The video for the song is also broken up with flashes of equally vibrant scenery, including an exploding volcano, tropical island scenery, and a fast-footed dance troupe. As the night carries on, the theme becomes seriously sexy when the party starts, and beautiful women begin to fill the joint. Crooners Konshens and Kemar are depicted romancing the gorgeous ladies. At first, it’s dancing, then there’s kissing, and by the end, there is a harem-like boudoir sequence.

Amassing nearly a quarter of a million views in just two weeks’ time, Volcano is a worthy follow-up to the release of Konshens’ album Red Reign. The 18-track project dropped in late 2021 and Konshens surely has no plans of slowing down. Previous hits Bruk Off and Turn Me On became hugely popular, elevated the artist to new levels, and brought attention to the genre globally. He recently received a warm reception when he arrived in Kenya to perform at a new year’s celebration in Nairobi, Kenya. Kemar Highcon also performed at the aforementioned grand event, marking his first time being on stage there. In 2018 he made waves with So Saucy, which became a summer anthem and helped put him on the map. The formidable pair is quite a powerhouse, and Volcano is nothing short of fuego with a fiery feel down to the finish.