In 2009, Queen Ifrica created a stir with the release of Daddy (also known as Don’t Touch me There), a provocative song from her critically-acclaimed album, Montego Bay. It touched on the sensitive issue of incest in Jamaican society.

Disturbed by rampant sexual deviance in her country, she recently recorded the song Predator’s Paradise, to bring awareness to these crimes. The single is from Redemption Project, an 11-song compilation album released in October 2021 by Nuh Rush Records.

“Songs like ‘Daddy Don’t Touch Me There’ and ‘Predator’s Paradise’ are speaking directly, I think, of how prevalent predators are in our society, and how protected they also seem to be. I think my pushback comes from some of those predators who are in high places, because predators are not just found among poor people. That’s just the truth,” Queen Ifrica stated. 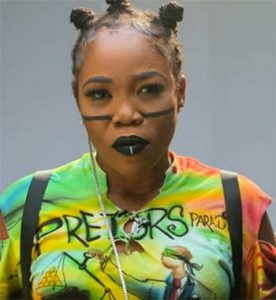 Coincidentally, Predator’s Paradise was released around the same time a groundbreaking Sexual Harassment Bill was passed in the Jamaican Parliament and Senate. The wide-ranging document seeks to protect the vulnerable including women in the workplace and minors.

Queen Ifrica has been critical of Jamaica’s legislators and children’s organizations, saying not enough was being done in terms of legislation to shield women and children from sexual delinquents, despite funding from international agencies.

“It’s not only in a sexual way that they are preying on our youths. You can see how violent our youths have become, they have to be influenced by people who are their peers,” she noted. “So, that is also part of the issue of male predatory influence on youths.”

Despite legislation of the Sexual Harassment Bill, some sectors of Jamaican society still feel endangered. They include the Jamaica Household Workers Union which has reported widespread exploitation of its members.

Shirley Pryce, who heads the organisation that represents almost 7,000 domestic workers, said her female members have complained of male bosses seeking sexual favours. Several of them who rejected those advances, have lost their jobs.

The Redemption Project is produced by Junior Brown, head of Nuh Rush Records. It also contains songs by Busy Signal (Never Get Tired), Kananga (Stronger), Lutan Fyah (Game is Over), Nature Ellis (Say A Prayer) and Turbulence who does Where I’m From (with Sunny Trad).

Brown said Predator’s Paradise was the last song recorded for the album. The song was never meant to be the album’s focus, but he is not surprised the powerful message thrust it into the spotlight.

According to Brown, “Her song has been chosen by the Most High to be at the forefront at this time.”

Like most reggae acts, Queen Ifrica has been frustrated at the downturn in live shows because of Covid-19. However, she has made use of time off the road.

“The past two years of Covid has been for want of a better word, interesting, for all of us. But for me, it gave me the opportunity to go introspecting and ‘outrospecting’, if that’s a word,” she laughed. “But, yeah, it was really more about finding self in its completeness; I’m still in the process but I’m at a more deliberate space and time in my life.”