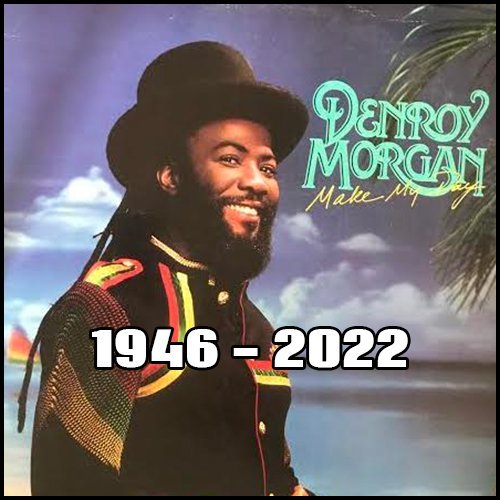 DENROY MORGAN HAS DIED AT AGE 76

Morgan, patriarch of Grammy-winning band Morgan Heritage, died in Atlanta, Georgia on March 3.
Clinton Lindsay, who knew the singer for over 40 years, was among the Disc Jockeys on Caribbean radio that helped make ‘I’ll do Anything For You’ a hit. At the time, he was on WHBI (later WNWK 105.9 FM).

“It was another proud moment for Jamaicans in New York to have another Jamaican, having such a big tune playing all over the place. In 1980, it was Bob Marley and The Wailers with ‘Could You Be Loved’ and Stevie Wonder’s ‘Master Blaster Jamming’…in 1978 Third World gave us another proud moment with ‘Now That We Found Love’,” recalled Lindsay.

Morgan had been living in the United States for 16 years. He relocated to New York City from Florida in the late 1960s and launched his music career there shortly after.

It was the summer of 1981 and Denroy Morgan had one of the hottest songs on New York radio. Released in February that year, I’ll do Anything For You gradually became a national hit and the Jamaican singer’s signature.

I’ll Do Anything For You

Everybody Wants To Be Somebody Else

Jamaicans in the West Indian-strong boroughs of The Bronx, Brooklyn, and Queens were familiar with Morgan as the lead singer of The Black Eagles, a band that played the club scene in that region.

‘I’ll do Anything For You’ was written by Bert Reid, an American of Jamaican heritage who wrote several disco hits that were popular in the Big Apple’s clubs.

“Most major Jamaican hits started in the local market, DJs like myself, Ken Williams, Gil Bailey, and Jeff Barnes, would be the first to play it to become a hit among Jamaicans in New York, but when Frankie Crocker of America’s number one urban station WBLS picks it up, wi know the tune gone,” he explained. “The momentum picks up even further across the nation because other major urban stations played whatever WBLS played.”

In a 2021 interview with the Jamaica Observer newspaper, Morgan reflected on the 40th anniversary of his biggest hit. He said it was not until ‘I’ll do Anything For You’ got serious play in a hip New York club called The Garage, that radio took notice.

Although he made his name as a songwriter of dance songs, Morgan said Reid was indiscriminate when it came to composing.

“He wanted a hit record, it didn’t matter to him what sound. It just happened that ‘I’ll do Anything For You’ was a dance track and disco was the hottest thing at the time,” he recalled.

‘I’ll do Anything For You’ earned Morgan a record deal with RCA Records, as well as a tour of the United States with R&B acts Evelyn King and Frankie Beverly and funk band, Slave.

Five years after the song hit, Lindsay remembers running into Morgan at a press conference in New York. There, he made a bold prediction.

“In 1986, Bunny Wailer returned to New York after 14 years. At the press conference, Denroy walked up to me and my colleague Karl Anthony, pointing to a bunch of kids he had with him saying, ‘Yow Clinton, see the future of reggae here’. Years later, I was the first to play Morgan Heritage on the radio,” he said.

A thanksgiving service for the life of Denroy Morgan will be announced soon.