Tabby Diamond has been killed 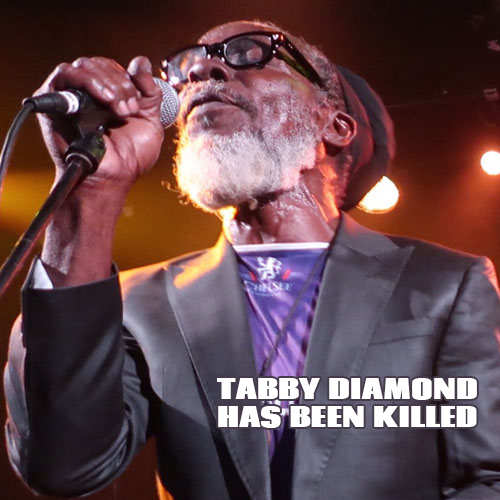 Tragic news from Jamaica has reached the reggae fraternity and left many fans in shock. Donald Orlando Shaw who’s better known as Tabby Diamond, the lead vocalist for the legendary trio Mighty Diamonds, has been killed in a drive-by shooting in Jamaica on March 29, 2022. 67-year-old Tabby Diamond was was among a group of people who were seated on the roadway when they came under attack at about 9:45 p.m.

Tabby Diamond, one of Jamaica’s most treasured voices, had an iconic career that spans over 50 years. Together with Fitzroy ‘Bunny’ Simpson and Lloyd ‘Judge’ Ferguson, who provided harmonies and occasionally lead, he formed the Mighty Diamonds, one of the most famous Jamaican vocal groups of the ’70s and ’80s. After unsuccessfully having recorded for Stranger Cole and Rupie Edwards they got their major breakthrough in 1975 when they started to record with Joseph ‘Jo Jo’ Hoo Kim’s Channel One studio. They scored big hits with Hey Girl and Country Living and consolidated their success with Right Time. In 1976, Virgin released their debut album titled Right Time, a classic collection showcasing perfectly the Mighty Diamonds’ uncanny ability to write catchy, meaningful songs. They sold throughtout the reggae world and picked up many crossover sales. The rest is history.

In 2020, The single This World (Is Goin’ Up In Flames) marked one of only a handful of times that Tabby Diamond has recorded without the other two members of the Mighty Diamonds.