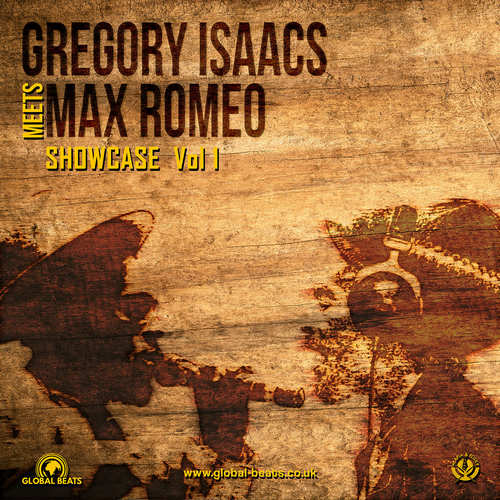 This vinyl LP called Showcase Vol. 1 brings together two Jamaican reggae legends as it features three vocal tracks each from Gregory Isaacs and Max Romeo and their dubs. The LP is produced by Mafia & Fluxy and released by UK-based Global Beats. No unknown songs from these two great vocalists as they were already previously released. Gregory Isaacs’ vocal cuts (plus one of the dub versions) are taken from the albums Reggae Heights (2000) and Open The Door (2004), while the Max Romeo songs were featured on the 1998 released Selassie I Forever album.

Side A is reserved for three remakes of the Cool Ruler’s classic social commentaries. Down The Line is about police harassment and Wah Dee a convict’s lament, whilst Motherless Children, which he first voiced for Sly & Robbie, is a stark and chilling account of the inequality that continues to divide us. On the flip side Max Romeo presents the kind of songs he’s known and loved for. He’s advocating repatriation to Africa on The More The Merrier and No Peace, whilst Reverend is a scathing attack on organised religion. The full force of the Mafia & Fluxy riddims come to the fore in the dub mixes that accompany each track.

Gregory Isaacs – Down The Line