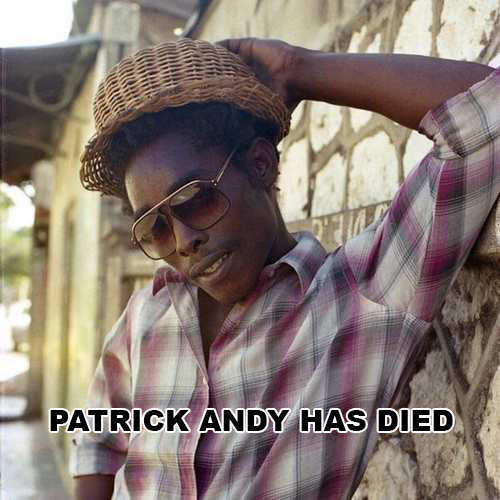 REGGAE SINGER PATRICK ANDY HAS TROD ON TO ZION

Patrick Andy was a reggae singer, whose stage name is a reference to his similarity to Horace Andy. He began singing at church and in school, and started his recording career with Yabby You in the mid-1970s, often covering songs by Horace Andy. In 1978 he had a hit with the single Woman, Woman, Woman“, done in combination with Ranking Barnabus, and a solo hit with My Angel. In the early 1980s, he began recording with producer Joseph Hoo Kim at Channel One Studios at Maxfield Avenue and further hits followed with Tired Fe Lick Weed Inna Bush and “Pretty Me“.

He had further hits with Get Up Stand Up (1984), Smiling, and his biggest success Sting Me a Sting, Shock Me A Shock, recorded for King Jammy in 1985. The success of the single led to more hits including Life Is So Funny, Speak Your Mind, Cow Horn Chalice, Music Market, Cooling Out, and What A Hell. Patrick Andy also recorded a number of so-called ‘Clash’ albums, where tracks were split between Andy and a series of ‘opponents’. These albums included Showdown Vol. 7 with Wayne Smith (Channel One/Hitbound 1984), Two New Superstars with Frankie Jones (Burning Sounds 1985), and Clash of the Andys with Horace Andy (Thunder Bolt 1985). Patrick Andy was born in 1960 in the Clarendon Parish of Jamaica and died on April 28, 2022.

Sincere condolences to his family and friends. R.I.E.P.

Sting Me A Sting