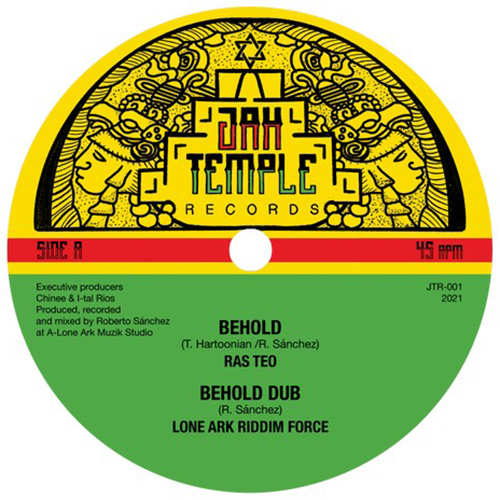 Jah Temple, a new label from California founded by Chinee and I-tal Rios who are also the owners of the Teocali Sound System, present a brand new 12″ vinyl platter with two vocal cuts and two riddims by Ras Teo & Lone Ark Riddim Force. The A side features Behold and its dub version titled Behold Dub with Ras Teo riding a tuff riddim previously used for Clive Matthews’ 7″ single Jah Live. On the flip side, there’s Ras Teo’s next vocal piece titled Shaka Warrior, which is extended with dubbed out version. Shaka Warrior has the roots singer talking about the Zulu war which took place in South Africa between the local Zulu Warriors and the European colonialists. This one is also delivered over a familiar sounding riddim as it was used for Willi Williams’ Don’t Show Off. Just like the dub of Behold, the dub of the extended Shakka Warrior tune is different from the ones that were featured on the 7″ singles.