by Teacher at Reggae VibesJun 5, 2022News 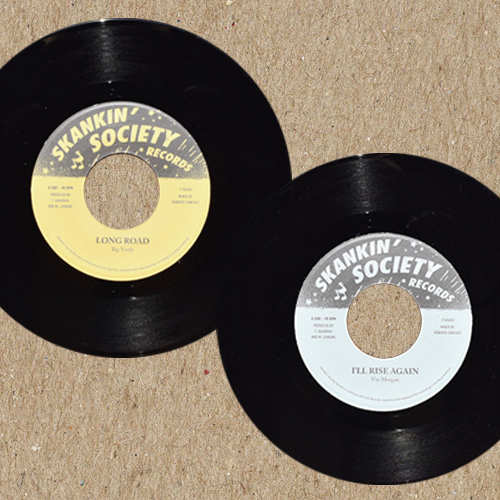 After the release of the singles Hold On by Cornell Campbell and Stamp ‘n’ Go by The 18th Parallel on their subsidiary label Skankin’ Society Records, the crew of Fruits Records again started to work on a batch of releases with Geneva retro reggae sound system specialist Skankin’ Society Sound System. These are now available on on standard 7″ black wax vinyl and feature songs from Big Youth and Vin Morgan.

The first single features Jamaican veteran deejay Manley Buchanan aka Big Youth who sets an 18th Parallel rockers one drop riddim led by the funky touch of drummer extraordinaire Leroy “Horsemouth” Wallace on fire with his cut Long Road. Big Youth proves that he’s still true to his roots providing conscious lyrics and legendary gimmicks. This 7″ single, with on the flip side the funky groovin’ and very infectious Dub Road, will take you into a trip to a Rockers movie dance party where style and fashion are as eccentric as the deejay on the mic.

The voice of the Soul Defenders Band (the Studio One in-house band after Sound Dimension), Vin Morgan was the musical director at Studio One in the 1970s, He surely knows how to combine good writing with catchy melodies to get hits. Here he’s featured on another new single called I’ll Rise Again. Its powerful riddim and strong lyrical content shall give hope and strength to all survivors: “I’ll rise again, in the sunshine, through the rain / I’ll rise again, patch up the bruises and ignore the pain / I’ll rise again, don’t let the system conquer me / I’ll rise again, I wanna choose my destiny”. Beautifully sung by Vin’s falsetto, I’ll Rise Again was recorded in Kingston under the musical direction of legendary bass player and producer Boris Gardiner. Just like the Big Youth single, it features The 18th Parallel’s guest drummer Leroy “Horsemouth” Wallace.

The music on both singles is mixed by Roberto Sánchez of the famed A-Lone Productions.