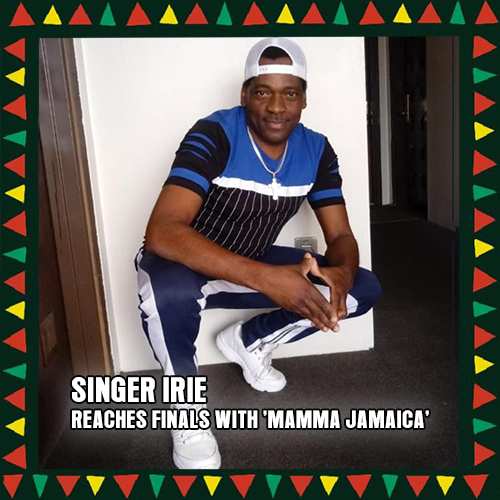 ONE OF SEVEN FINALISTS

In the pre-social media era, Jamaican artistes like Singer Irie depended on the most basic form of promotion to expose their music. Seeing their names on a dance poster was a big deal.

These days, his face and songs are everywhere on the internet.

His current song is Mamma Jamaica, one of seven finalists in the Jamaica International Independence Festival Song Competition, scheduled for July 30th in Snellville, Georgia.

Singer Irie has been recording songs since the early 1980s. Previously known as Patrick Irie, he voiced for producers including Winston “Niney” Holness and Sugar Minott. He was also a fixture for several years on sound systems in Jamaica and the United Kingdom.

“As an artiste in America, it gives you an opportunity to show your talent. Mi always love Festival, from mi a youth; an’ mi see Jamaica as a mother, a great mother,” said Singer Irie, who lives in New York.

Produced by Young Lion Production out of the UK, Mamma Jamaica is his first patriotic single. In his youth, Singer Irie tuned into ‘Festival’ annually during Jamaica’s independence celebrations in August.

There are bigger plans for Mamma Jamaica. “It’s not just a Festival Song. This song will be played long after the competition,” he said.

Born Wayne Campbell, he had a change of moniker seven years ago. After a break from the music business, the former Patrick Irie thought a new identity would suit his fresh image and Singer Irie was born.

From the Waterhouse area of Kingston, he grew up in different areas of Jamaica’s capital. His first song, Pretty Lady, was produced by Niney; there were follow-up songs for Arrows International, Philip “Fatis” Burrell, and Sugar Minott.

Although none of the songs he recorded for Minott were released, Singer Irie has fond memories of his time with the dancehall legend who died in 2010.

“Well, Sugar was a person that welcome every artiste and teach us to be better in our craft. A kind, loving person, fun to be around,” he recalled.

After years of singing on sound systems such as Cave Man, Creation, and El Mundo, he relocated to the United Kingdom where he rubbed shoulders with acts including Junior Delgado, Alton Ellis, and Horace Andy.