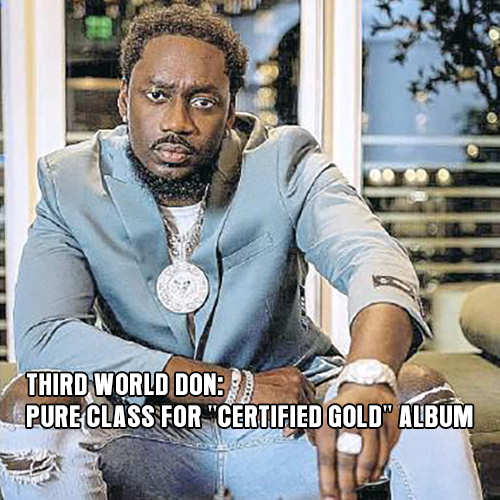 The saying, never judge a book by its cover, has exceptions- at least for Third World Don. The cover of his music is colourful, so too is the message which is deep-rooted in his songs.

The Jamaican-born US based song-writer, rapper, and producer, keeps getting the attention every entertainer would like to clutch under their arms. And, in terms of family, Third World Don roots include famous writer, Evon Blake and National hero, Marcus Mosiah Garvey. Third World Don will be taking the spotlight on “Certified Gold”, an album which is to be released in August, 2022.

Words from producer Michael “Beatbopper” Hudgins is that, “the title of the album speaks for itself. The songs are golden; even if they don’t make a hit this year, they will do so years to come.”

Third World Don born Michael Junior Barnett often recalls, “Growing up in the streets of Kingston was like being raised in a volatile war zone striken by poverty where a majority of individuals turn to crime and violence strictly out of desperation and survival. Even on the flip side, you have this lush green island paradise with amazing language and culture which equally could be the most beautiful place on earth. This quality was the early backdrop of my life that inspire my art.”

Third World Don aka Mike Beatz is a former member of the Music Group Wizard Sleeve (2005-2012), known for its hit song “Riverside(Let’s Go!)”, released by Data Records in 2018. The single entered no. 2 on UK and Ireland charts and is noted as one of BBC radio 1 top 40 singles of the era with over 23 million streams on digital Spotify.

“I operated by own studio anywhere from small closet home-set to large full fledged professional studio which I owned or partnered. I am a true renaissance artiste, master of all trades. There is no box, barrier or limit to my creating style or genre. I rap, sing, produce write, direct, run my companý, you name it.”

His latest project is “Trench God” album while his singles include “Kelly Price” and “Heaven.” So, where is he heading? “To get the plaques, platinum, Billboard, and Grammy.”