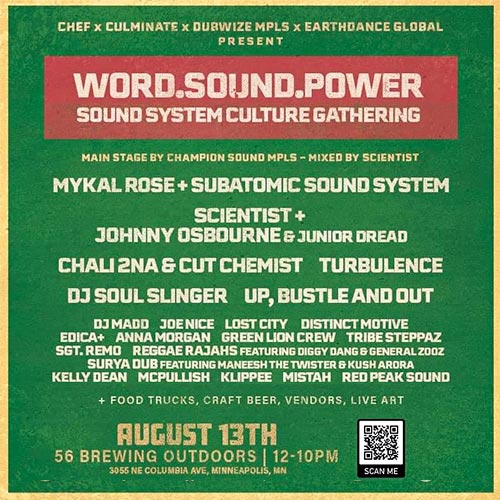 Now’s the time to buy your tickets (online at “The Ticketing Co.”) for what promises to be one of the biggest celebrations of sound system culture in the U.S.: The inaugural “Word. Sound. Power. Music & Arts Festival” will take place outdoors, block-party style, August 13 from noon to 10 pm, in downtown Minneapolis.

Headlining the show are legendary singers Mykal Rose and Johnny Osbourne, as well as legendary sound engineer and dub pioneer Scientist (also known as Hopeton Brown); Scientist will not only perform, but also act as the master sound engineer for all of the festival’s amazing artists; it’s worth closely scrutinizing the litany of talented performers—too numerous to specify here—listed on the festival’s promotional materials.

When asked by Reggae-Vibes how he came up with the idea for the event, Scott Stanley replied: “The whole festival is based around sound system culture. So sound system culture, as you know, came from Jamaica in the 50s. But nowadays sound system culture is going strong with drum and bass, and reggae, and everything you could ever imagine that’s electronic-based underneath the moon—all on these sound systems. It’s multi-generational. All different kinds of music.”

Expounding his vision for the festival, which he hopes will repeat each year, and, eventually, spread to different parts of the country (and, maybe, depending on its success, to different parts of the world), Stanley said: “It’s really a toast to sound system culture. Not only do we have some legends of reggae, we have legends of drum and bass, like the guy who pretty much brought drum and bass to the U.S., D.J. Soul Slinger. You know, you have all these generational artists—who pretty much never play out anymore—coming to do this event. Because not only are they friends, but they understand the whole concept of this festival, and what it can do for America. And what it can do for sound system culture here.”

Stanley continued: “As you know, sound system culture always has toasters on it. That being said, five of the artists are actually just going to be going from sound system to sound system—it’s going to be on five (sound systems)—toasting on top of all the different artists. We’re going to have five live graffiti artists doing giant walls, and, we’re gonna have probably another 10-12 different live painters that are gonna be around, [too]. It’s gonna definitely be very artsy intertwined. [And, for people with appetites,] we’ll have four different food trucks plus me and my partner’s food [business]. A whole different array of foods from sushi burritos to, you know, yardie food, to high-end tacos, and—anything you can eat standing up.”

Stanley confided it’s hard to predict, especially since this is the first time such a festival has occurred, how many people will come, but, he’s nevertheless optimistic for a sellout; he noted if the festival does sellout, it will endeavor, to the extent festival-goer capacity allows, to still sell some tickets at the door. But why take that chance? Don’t miss out—reserve your spot today!