Richi Bangin: From Gemini Sound System to All Spikes Studio 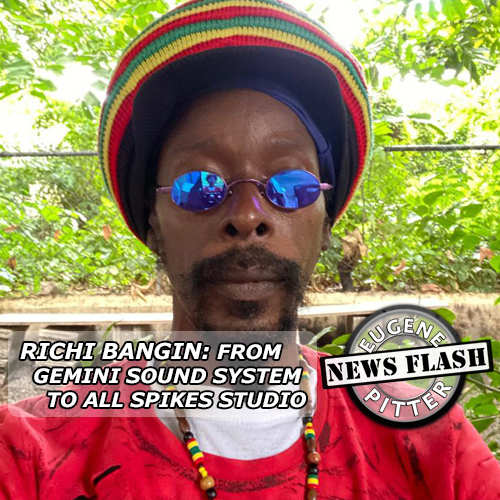 Studio One is known for attracting a host of artistes from the ska, rocksteady, and reggae era in the 1950s, 1960s, and beyond.

Sir Coxsone Dodd’s claim to fame came from producing and promoting this music – not only in Jamaica but elsewhere. His record label, Studio One attracted the likes of Burning Spear, Delroy Wilson, and Sugar Minott.

Brentford Road was home to Studio One. This is now Sir Coxsone Boulevard named after this giant record producer who died May 4, 2004.

In 2002 he was awarded a Gold Musgrave Medal by the Institute of Jamaica.

Richi Bangin, born Richard Murphy, a Rastafarian chanter while living at 22 Brentford Road, could easily walk from his house and rub shoulders with artistes including Yellowman, Michigan & Smiley, and Alton Ellis.

According to Richi Bangin, “I was about 8 years old then. My bigger brother Michael aka “Frekeh” was working with Gemini sound system. That sound played in my yard during weekends so I could watch them play and even got the opportunity to go on the road before they enter the yard.”

Whilst attending McCaulays Primary and All-Age school located in the old capital, Spanish Town, the chanter’s ears were glued to Bob Marley’s songs.

“My favourite is “Redemption Song” because it is a protest against discrimination. Teachers and the school community kept me busy performing at school functions and concerts.”

“I had links to Mr. Wong Recording Studio and met a number of talented artistes including Gyptian who recorded a big hit titled “Serious Times”. I also work as a road manager and performed on Portmore Festival and several community shows.”

“It is such a pleasure working with him. He is likely to surprise anyone because of his passion for music and delivery. He also released songs that we have done together along with music videos. His songs recorded on my label include “Up This Time, “Cut And Clear”, “Werewolf” feat. Imus Behdeng.”

(Photo courtesy of All Spikes Production)