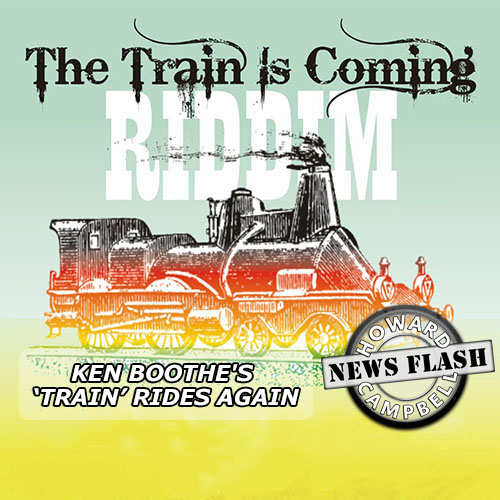 During the rock steady craze of the 1960s, there was no shortage of dance songs, many of which have endured through covers or sampling by contemporary artistes. One of those songs is Ken Boothe’s The Train Is Coming.

Its timeless beat is the driving force of The Train is Coming Riddim, a 15-song compilation album from Upstairs Music. Released last September by Zojak Worldwide, it is a rocking update of the classic song.

Danny Breakenridge, founder and principal of the South Florida-based label, said he laid tracks for the project several years ago but waited for the right time to select the appropriate artistes. They are headed by Boothe, whom he has known for over 50 years.

“The song was one of my favourites from the original was released. I covered it over 20 years ago for an album I did with Ken named Acclaimed. More recently, I revisited it with the help of musicians such as Lloyd Parks (bass), Desi Jones (drums), Yishka (saxophone) along with Paul Gauntlett on guitar and keyboards. All of the artistes are people I have worked with in the music business and most of them I have recorded before. They all loved the rhythm, so I invited them to join the ‘Train Gang’, and they came on board,” Breakenridge explained.

Boothe does a rollicking version of The Train Is Coming which remains a show-stopper at his concerts. Wayne Armond with YaYa, AJ Brown who does People Are People, Yishka (Rocking Ride), Marcia Ball (Wishing Wishing), Kehv (A Smile), 2 Of A Kind (Return, Natural) and Dheapblu with Don’t Play Mi are some of the acts who contributed to The Train is Coming Riddim.

Produced by Clement “Coxson” Dodd, The Train is Coming was released in 1966. It helped launch Boothe’s career which started at the tail of the ska era.

The song enjoyed a revival in 1995 when it was covered by Shaggy for the Wesley Snipes/Woody Harrelson hit movie, The Money Train. It has also been covered by UB40.

Born in Kingston, Breakenridge grew up in Allman Town, a middle-class community where some of Jamaica’s top artistes lived. They included BB Seaton, Carl Dawkins, and Horace Andy.

In the early 1970s, he befriended Boothe, a close friend of Seaton’s, and began to learn the producing business with Boothe and Seaton for Seaton’s Soul Beat label. Later that decade, Breakenridge started his own productions, the most successful being Let’s Dub It Up by Leo Hall which did well in British reggae circles.

Breakenridge has lived in South Florida since the mid-1980s. He has produced a number of artistes through Upstairs Music.

Ken Boothe – The Train Is Coming