Spragga Benz: Man of the Moment at deejay Merciless funeral 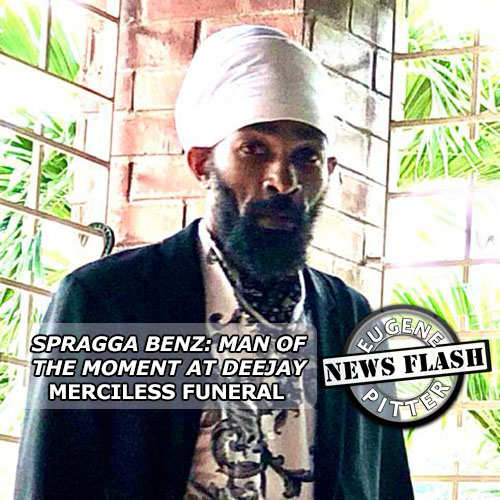 Spragga Benz: Man of the Moment at deejay Merciless funeral

Amid hundreds of mourners, the international deejay/actor went acapella with a song titled, “Sleep with Angels”. All eyes were fixed on the deejay who was featured on IRIE FM’s one hour “The Journey To Success” less than a week ago.

The words of the song expressed the hope of a glorious re-union with a friend he had known for some 28 long years.

“The Lord giveth and taketh away,
Nobody pon earth never
come yah fi stay
Just like a cigarette ina di ash tray.
Yu live all you life,
then yu die one day
Life is a gift, to both rich and poor.
Death is the only thing that is sure
Everyone must go
through that black door.
So all a mi friends
Who had gone through before,
May your spirit rest in eternal peace
And I hope one day we will all meet
And reason pon glory street.
But, sleep with angels
And may your every dream come through
I mean it honest I do
Until my little heart stop beat
There will always be place for you .”

In an interview with Reggae Vibes, Spragga Benz says, no matter the circumstance he could not have missed attending the funeral of Merciless.

“Merciless and I have been friends for almost three decades. In fact, 28 long years. And, I never had a bad day with him. When my son, Carlyle passed away he was there for me. And, when his wife died I was there for him. If I were in a bad situation which needed help, Merciless was one person I could depend on. “I met Merciless at Arrows Recording Studio. He was there to voice a dub-plate and that was in the nineties, about 1994.” 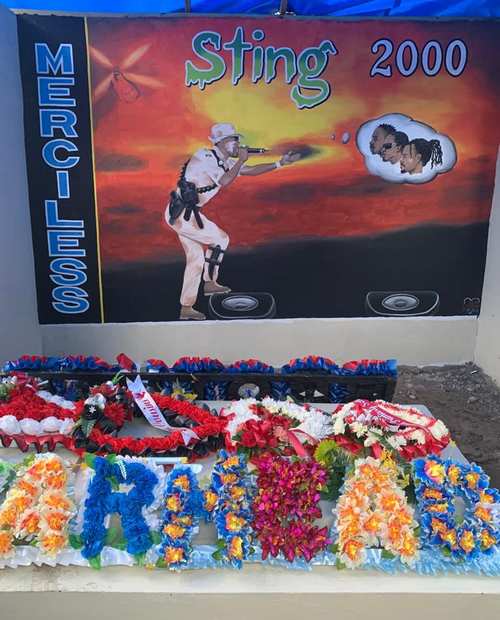 He ( Spragga ) recalls one moment which brought suspense.

“This was when we had a performance abroad. Nearing the start of the show Merciless couldn’t be found. We made several attempts, calling his room phone several times without an answer and knocking his door. We were now about to knock off his room door when someone suggested that we borrow a spare key to open the door. There was Merciless wrapped under his sheet. Then, to add humor, he was now asking us why we did not call him before.”

The year 2000 was a history-making one for deejay Merciless who lyrically destroyed Ninjaman, Beenie Man, and Bounty Killer all at once.

“I was there ready to jump on stage, to help out Merciless, but he was already winning the clash.”

Merciless, born Leanord Bartley, a Clarendonian, was found dead at a guest house at Walker’s Avenue off Beechwood Avenue, St. Andrew, july 19, 2022. He was 51 years old.

His big break in music came with the release of “Len Out Mi Mercy” which went no. 1 on local and international charts. Other chart busting songs are “Mavis,” ” Mama,” “Ole Gallis,” “Mama Cooking,” “Whadup.” and “Let Dem Have It”.

Spragga Benz, born Carlton Grant is still creating waves after thirty years in the music industry. He drew out some of the biggest names to his Second Chance movie premiere at Carib Cinema, Cross Roads, July 21st, 2022. And, after 20 years release of Shottas, is still refer to as Wayne a character he plays in the movie.

“I am now doing the finishing touches to my up-coming album titled “Once Upon A Time”. This will have some 15 tracks including, Beres Hammond’s “Oh So Good”, Marcia Griffiths’ “Mama Lessons,” Morgan Heritage’s “Oh Rasta” and Bounty Killer’s “Remember to Pray.”

Both Marcia Griffiths and Beres Hammond recorded their tracks at their home studio, while the other songs were recorded at A Team studio in New York. The album, which is scheduled for released in November, 2022 is co-produced by Red Square Productions/ A Team.