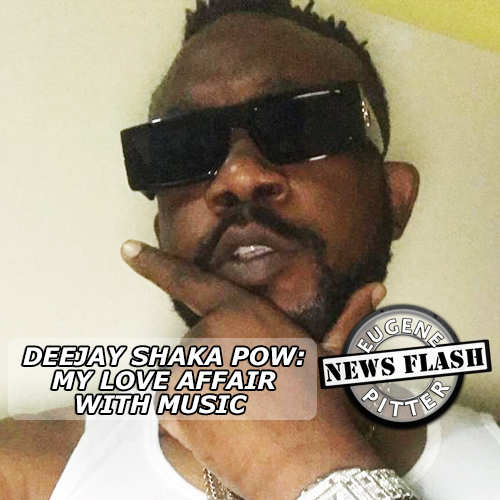 Third of a six part series.

If one should ask deejay Shaka Pow, “How much do you love music?” don’t be surprised if he tells you he is in a love affair and there is no time soon the knot will untie.

“My music comes from my navel string, so it will forever be a part of my life. Music motivates everything else that I do so, one could say I have this unconditional love for music.

“Music is a therapy for unhappiness if it is the music that inspires others. And, this is one of the reasons I do songs like, “Love God” and ‘Fully Bright.”

“My father Kasmir had a little turntable at home and as a child, one would be fascinated about anything which is musical. So, once the music is on, there I was, ready to get on to a riddim. And, I am talking about being, say three years old.”

“Don’t be surprised, because at that age some people thought I would be fully bright. I found joy in deejaying about anything like the alphabet. That was enough fun to make people laugh.”

“Then, I would start deejaying at school and people began to get acquainted with my lyrics, so I knew I had an audience out there waiting to taste my talent.”

“But, being fully bright at school made me even more lyrical on stage because I didn’t have to search for lyrics, I could deejay on spot.”

The emerging deejay was so excited about the reward and recognition he could get from music that he entered a deejay competition at Coconut Park in Kingston.

“I never really forget about music at any time of my life. Throughout high school, I could sing the lines of songs like Lt. Stitchie’s “Wear Yu Size” and could tell that one day I would be on that big stage.”

“At university, I was exposed as an opening act for such artistes as Beenie Man, Bounty Killer, Baby Cham, and the defunct Scare Dem Crew, which includes Elephant Man, Harry Toddler, Nitty Kutchie, and Boom Dandymite.

“I knew, through music, a lot of producers including King Jammy’s, Steely & Clevie, Jack Scorpio, Sly & Robbie, and Q45.”

The deejay has performed on Sting, Teensplash, and Professionals in Cabaret – a charity show, among others.

He has released three riddim-driven albums. These are the “New Money”, “Space Dem” and “Madd Energy” riddims.

Next in line is the “M5” riddim to drop January 2023 and then the “Yung Gal Biznizz” riddim.