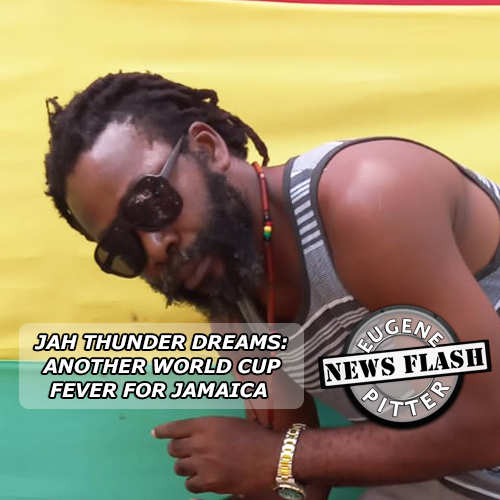 He hopes the Jamaica Football Federation (JFF) will again make history when Jamaica qualified for the 1998 world Cup having finished third in the final round of CONCACAF(Confederation of North, Central America, and Caribbean Association Football).

“Jamaicans love football and this loved intensified after we qualify for World Cup in 1998. Just look at the football fever going on now, with the number of flags being purchased; the daily discussions about favorite teams, even among the ordinary man on the street.”

“0ur dreams of another glory keep shattering every four years since 1998.”

“Three suggestions on how to improve our chances of being qualified are to plunge more money into our football programmes.”

“Talented players need more than a few pairs of football gear, a good environment to live, medical care, and proper food; Secondly, begin our football programme from the primary school with at least 10 years of devoted serious training. This would almost eliminate having to rely on overseas players and finally, expose the team to more competition under varying climatic conditions.”

The last Gleaner/ RJR Don Anderson poll (July 16-26) gave the JFF a failing grade for managing the national team, whilst there is a call for resignations at the island’s top football office.

The FIFA World Cup simply called the World Cup is an international association football competition contested by the senior men’s national teams of the members of the Federation of International Football Association (FIFA), the sports governing body.

The current winner is France, along with favourites including England. Brazil five-time winners edge Switzerland 1:0 on Monday to book a place in the FIFA in this World Cup last 16. Thirty-two teams made it to Qatar where the finals are being held.

Jah Thunder, given name Omar Bolt, is boosting the promotion of a song titled “Football.”

“This song will definitely help to re-live Jamaicans of World Cup 1998. I wrote and released it (song)a year ago because I think it can inspire us to greatness. It was released on Black Star label out of Holland. It also has an accompanying music video.”

The singjay, a cousin of Capleton was born in Cassia Park, St.Andrew and raised in Papine.

“I really got my influence for music from my cousin Capleton and other artistes including Peter Tosh, Bob Marley, and Jacob Miller.”

“I love positive songs and was eager to write my own lyrics. The first song I released was one called “Bada Bada” on the African Star label.”

Jah Thunder has toured several countries as an opening act for Capleton’s shows.