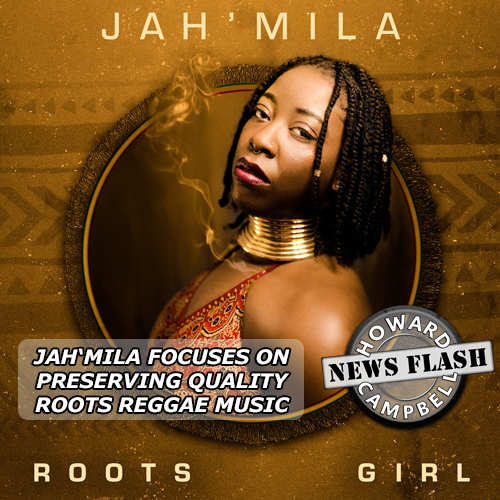 Having spent much of her life around reggae’s cultural elite, it is fitting “Roots Girl” is the title of Jah’Mila’s first album, released on November 1.

Based in Halifax, Canada, the Jamaican singer had a strong resume prior to “Roots Girl”. It included a number of solo songs as well as a healthy serving of background vocals for some of reggae’s top acts.

“Overjoyed, and grateful. Relieved to finally have it out, because there were so many challenges that our team had to overcome to bring it to life,” Jah’Mila said of “Roots Girl” which has eight songs including the title.

Most of the musicians who played on the set are Canadian, but the most famous is her father, renowned guitarist Earl “Chinna” Smith, whose vast credits include albums and songs by Bob Marley, Dennis Brown, Bunny Wailer, Burning Spear, and Lauryn Hill.

According to Jah’Mila, she and her band simply stuck to the tenets of traditional reggae on “Roots Girl”.

“Chant Their Names”, inspired by victims of police brutality such as George Floyd, is the album’s lead single. The follow-up is “Sugar & Spice”.

The Kingston-born Jah’Mila has lived in Halifax for seven years. In that time, she has established herself in the city’s small reggae colony.

She continued the recording career that launched 20 years ago under the tutelage of her father alongside her brothers and sisters he dubbed The Smithsonians.

That was preceded by countless gigs as an harmony singer with Black Uhuru, Ken Boothe, The Congos, and The Wailers.

Jah’Mila is scheduled to perform November 25 at the Rebecca Cohn in Halifax with Canadian folk singer Jimmy Rankin. In February, she tours Toronto for one week with the Toronto Symphony Orchestra as part of its Reggae Roots Educational Program.