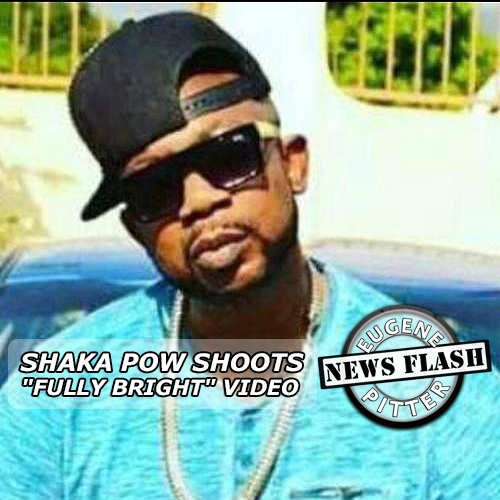 ‘Fully Bright’, seems destined to become an ever lasting slang, especially with the shooting of the video on Sunday December 4, 2022.

Shaka Pow, now dubbed as the Fully Bright artiste, along with his Fully Bright team spent an entire day to send the message across that Jamaica needs a Fully Bright population to move ahead.

“A lot of countries are way ahead of us in terms of literacy. And, not withstanding our setbacks including COVID-19, we need to promote that, a good education is better than silver and gold.”

“The more highly professionals and skilled workers who remain in Jamaica, will better our chances to make lives better for everyone in the future.”

The scenes of the video were done in Kingston and directed by the highly professional Reggae Tropics team directed by G Mac.

“I chose that production house because they have had a history of making excellent videos for such artistes including Sizzla Kalonji and Natty King.”

The video is in response to the ‘Fully Dunce’ saga. Only last week an adult reprimanding a group of students advice them to be Fully Bright in school. He feels that the slogan could help to drive excellence among students.

This is something which the Ministry of Education should immediately endorse. We should have Fully Bright placed beside the names of our schools, in classroom and along the country’s major through-afares and communities.

Public trandports should be included, such as the JUTC instead of playing ‘Fully Dunce’ songs which promotes violence, illicit drugs, and illegal guns.

Shaka Pow has remained relevant in the dancehall arena for over two decades. He has had some sporadic successes with songs, including “Book,” “Rubba Bounce” feat Samboni, “No Ice Cream Love” feat. Abby Dallas, and “No Loving,” a combination with Beenie Man.

During the height of the COVID-19 pandemic he released three riddim-driven albums, “Space Dem,” “Madd Energy,” and “Neww Money.”

He is promoting “Unconditional Love” which is edging towards 100,000 views in a matter of a month being released.