Lawyer Walker and her Music 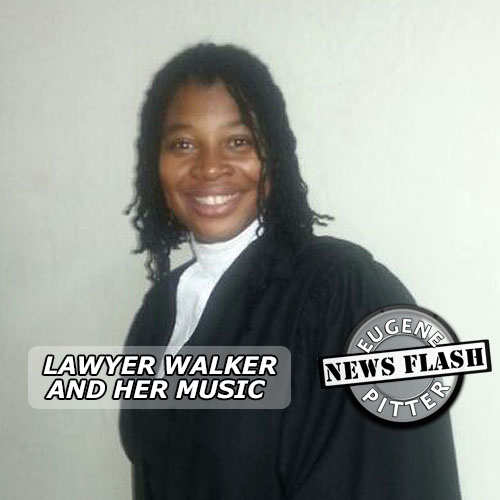 Final of a five-part series.

“I was born with music in my mind and this became more pronounced as I grew into my teenage years.”

“Going to church allowed me to follow the example of my mom who was singing in church. In fact, my mom loved singing so much that it became her hobby to sing just about everywhere. She would be singing in the kitchen while washing clothes, even before she prayed at night.”

“I followed in the footsteps of my mom on her so-called gospel train. But, while it seemed she had this passion for straight gospel, I went for what one would consider to be the music of the rich and famous.”

“This is straight classical. And, I am talking about people like Luciano Pavarotti.

“People, whether outside the courthouse, or elsewhere, are amazed that I can raise the highest notes without absolutely no vocal difficulties.”

Lawyer Walker takes her soloist pastime more seriously than one would think. She would read the Bible and sing out the stories she has learnt.

“It is not hard to sing out the stories of David and Goliath, or Jonah and the Whale, or even Sampson and Delilah.

“God gives everyone a talent and whenever we discover such talent we should not shun away from it.”

“I seriously used to ask my mom what she was doing during her spare time when she was pregnant with me because I know that may have something to do with my singing.”

Lawyer Walker feels that the average man on the street would have loved her being a deejay or singjay who is in the popular juggling heard in public transport.

“They believe this Lawyer Walker would get more recognition and that the dancehall fever would take me to places I had never been to before. But, I want to go international because my goal is to reach everyone – from Presidents, Kings and Queens to the bare-footed boy living in Trench Town or Arnett Gardens.”

“I must be able to sing at a Tony Rebel Concert or at the National awards ceremony at Kings House.”

Lawyer Walker has big dreams as she would like to collaborate with a few Jamaican artistes namely Grammy award winner Buju Banton and Beres Hammond.”

“Bob Marley is also my favourite. He is very relevant and a powerful performer.”

She is convinced Buju Banton can make her dreams come through. Weeks after his historic Long Journey to Freedom concert, she visited him at his studio.

“I arrived at the gate dressed for court and the gate was opened. I stepped inside and saw Buju sitting in what I imagined is the receptionist area.

“I went up to him, introduced myself, and turned on my phone allowing him to listen to a song I had recorded about him. He did not say a word and I left.”

“Buju is a great singer. He is an inspiration to thousands around the world. I must admit that Beres Hammond has a superb voice that will help in getting my message across the world. A message to motivate our young men to rise up and seek ways to better themselves.”