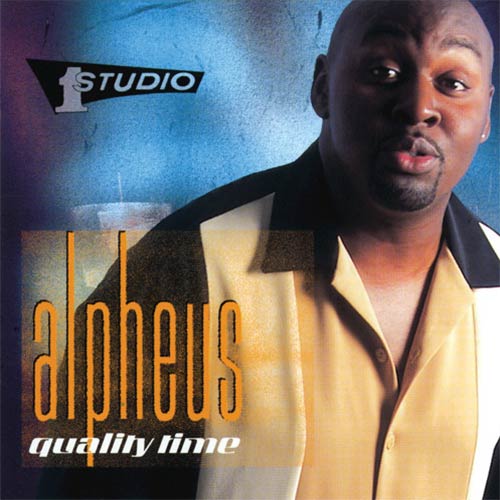 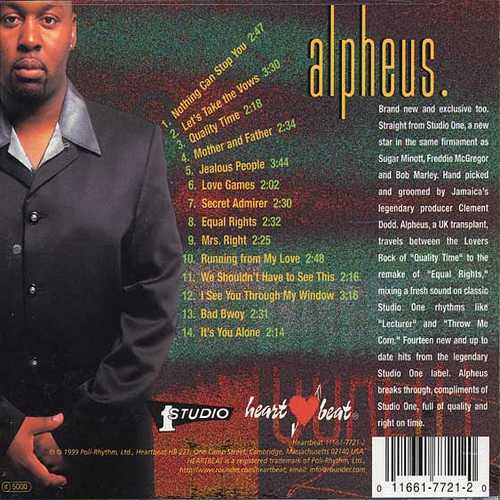 Born and raised by Jamaican parents in London, England, Alpheus developed a passion for singing after seeing Sam Cooke perform on television. His love for reggae developed as he was exposed to singers like Dennis Brown, Michael Gordon, and Thriller U. In the late ’80s Alpheus became active in the London reggae scene, often singing with local sound systems including Trenchtone Rockers and Kenyatta. But his professional singing career wouldn’t kick into gear until he migrated to the United States. While vacationing in Miami in 1993, Alpheus met up with Mix 96 radio hosts Ty Duncan and Godfather. Realizing his vocal talent, they encouraged him to sing and record dubplates, which caused quite a bit stir on local sound systems and Miami radio.

Alpheus often travelled from New York to Miami, taking creative inspiration from the music environment and tropical climate. While voicing more dub plates at Dub Lab recording studio, he met veteran singer Tony Brevett of the vocal harmony trio the Melodians. Later, in New York, Tony linked Alpheus with Mr. Dodd in November of 1997, and the beginning of Alpheus’ association with Studio One began. As many reggae artists will tell you, working at Studio One is like attending a college of music, and soon Alpheus was learning the ropes, voicing harmony tracks for Michael Rose, Everton Blender, Sugar Minott, and other artists working at Studio One. In 1998, Alpheus signed a recording contract with Studio One, and recorded the singles “I Wish You Were Mine” and “Why You Got to Leave Me,” which were featured on Heartbeat’s Studio One Dancehall Selection CD .

“Quality Time” is Alpheus’ first album. All the production work on the album was done by the legendary Coxsone Dodd, and excellent production quality is guarenteed on all 14 tracks. As soon as the first track – “Nothing Can Stop You”, across the ‘Lecturer’ riddim- starts playing you’ll get infected by that distinctive Studio One vibe. Throughout the entire album Alpheus’ rich and warm vocal delivery perfectly combines with the classic Studio riddims. The riddims used here are some of the best Coxsone Dodd has produced since he started out producing records : ‘Throw Me Corn’, ‘Back Out With It’, Lecturer’ , ‘Wont You Come Home’, ‘Equal Rights’ and ‘Pick Up The Pieces’ just to mention only a few. Alpheus concentrates on love themes, with the exception of the tunes “Equal Rights”, “Bad Bwoy” and “We Shouldn’t Have To See This”, which deal with the problems of our world.