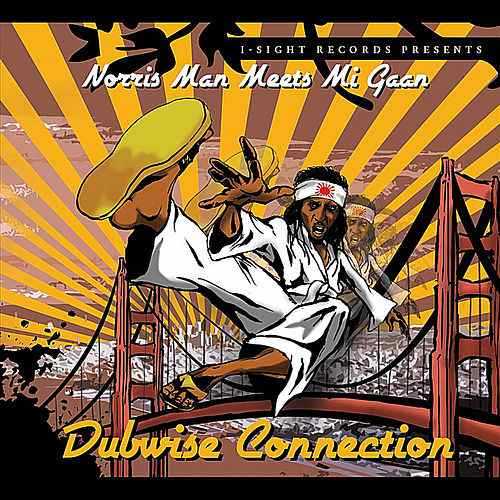 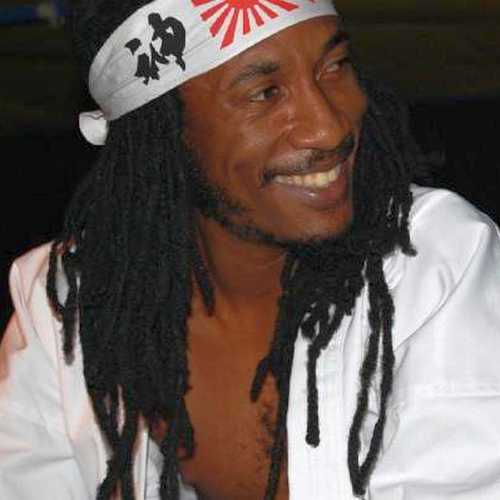 Every now and then, a Reggae recording comes along, grabs full attention and won’t let go. A release that is raw in nature that allows singer and players of instruments to fully evoke true Roots Reggae Musik. There is a brand new all killa naw filla that has these credentials; “Dubwise Connnection – Norris Man Meets Mi Gaan”.

Norris Man is a well established true Rastaman originally from Trenchtown/Arnett Gardens in Jamaica. Born Christopher Campbell, he changed his name due to his childhood liking of Chuck Norris; martial arts man. Bitten by the musical bug from early on, his bredrin would stand him on a Guiness box so he could sing. He sang all around town; specifically at Kingston Ballroom. By 22, he was recording at heavyweight studios Leggo and Black Scorpio, drawing attention from prominent producers like Iley Dread. His earliest works include “Congo Shanty”. He debuted at Sting ’98 and has never looked back! His VP release from 2000, “Persistence” is revered as classic. Consequent releases “Heat Is On” “World Cry” and “Know The Road” furthered his reputation of chanting conscious Rasta content-niceness.

Mi Gaan is one of the fastest rising riddim sections in the world right now. Originating in the sleepy hills of Forest Knolls, California; just above The Golden Gate Bridge. They are garnering international attention. Comprised of Red Lion (Jeremy Gray) on drums; Justin Marci as bassie and Kevin O’Brien on guitar licks; Red Lion and Marci have been a unit for over eight years. They have a unique sound reminiscent of Sly/Robbie with a dose of Aston/Carlie Barrett and a spice of jazz. A very tight sound that have played with Clinton Fearon, Mikey General, Luv Fyah, Kulcha Knox and Tuff Lion to name a few. Their debut release, “Rough Cuts 2011”, has created a stir and they are constantly in demand.

“Dubwise Connection” is a genuine treat! Recorded at Two Willow Studios in only two days, all those involved have the knack. The studio is owned by Ijay International, who has managed tours for Peter Tosh, Third World, Jimmy Cliff and Mighty Diamonds. Rootsman Tuff Lion showed up to lend his “ten strings” magic. It starts of with “I’m Trying”, a blistering horn driven track that showcases Norris Man’s truly heartfelt voice. You can feel his life through his voice; wisened by ghetto life and standing firm; very noble. “Babylon” boasts thought provoking lyrics on par with Midnite; with killer melodica and percussion. “Love Life” is one of the sweetest tracks here with Norris Man using full vocal range over a crucial acoustic riddim. “Believe It” is believable. A rock solid riddim highlighted by some amazing guitar licks. “Ancient Scrolls” is ambient. Lyrics like, “Who Don’t Know Righteousness Is In Darkness” hover over mystical riddim blocks.

As a youth, Norris Man would reason under a tree, absorbing lyrics from Mr. Nesta. This inspiration holds true with “Rastaman Chant”, an acoustic masterclass. “Love Dem” is lyrically potent with a serious drum/bass workout. The final vocal, “Woman Have Faith’ is pure upliftment; an acoustic song of strength and observation. We are treated to six Dubs that really show the professionalism of Mi Gaan. “Ancient Dub” is put thru the echo chamber that is stratospheric! “Dub It” accentuates some of the most crucial guitar work to come out inna while. “I’m Dubbing” grabs you from the opening horns and won’t let go. “Babylon Dub” shows Augustus Pablo influences with some Sky Juice style percussion. “Dem No Dub” shows the trust that these bredrin have for each other; Sly & Robbie quality to the max!

“Dubwise Connnection” will catch you by surprise and its roots and branches won’t let go. It is an intoxicating blend of pure niceness. Norris Man is a committed Rastaman that “brings it without Blinging it”. His lyrical approach is heartfelt and overstanding. His style is all his own but I hear Ras Shiloh like similarities; the cream of the crop. Combine that with the homegrown genius of rising lions Mi Gaan and a special project has been created. The riddim section is currently working with ‘Reggae Ambassador’ Iqulah and Norris Man is striving to continue blessed Jah Works.

Conclusion Don't miss out on this ya slice of sweet Reggae.