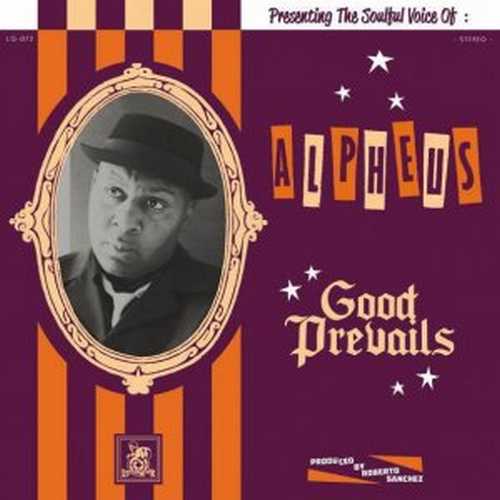 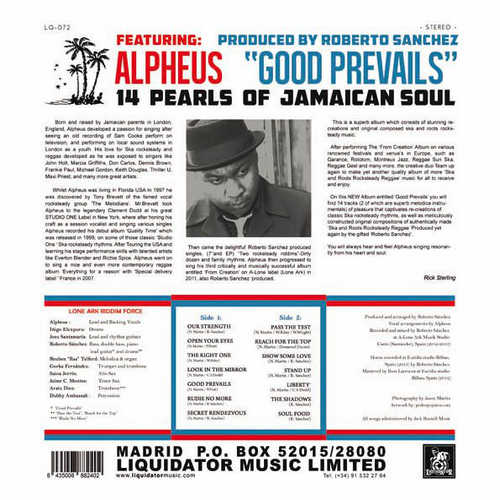 Discovered in 1997 by the late Tony Brevett of the vocal harmony group The Melodians, singer Alpheus was lucky to be introduced to the legendary Sir Coxsone Dodd of Studio One for whom he recorded his 1999 released first full length album called “Quality Time”. The 14-track album, which of course featured a whole heap of classic Studio One riddims, introduced Alpheus’ rich and warm vocal delivery to the reggae world. It was obvious a major talent had arrived and although the many fans he gained through this well received set where longing for a next Studio One set it didn’t happen. Instead Alphheus started working with French duo Bost & Bim, who produced his sophomore album “Everything For A Reason”, which hit the streets in 2007. This wasn’t a bad album at all, but musically it lacked the magic of Alpheus’ debut set.

However, pure magic came back again when Alpheus started working with producer, musician and engineer Roberto Sánchez on the “From Creation” project, the soulful singer’s third album, which was released in 2011. Roberto Sánchez and the Lone Ark Riddim Force built and reworked riddims that harked back to the days of rocksteady and ska, a concept that fits Alpheus’ style and fashion perfectly well. Not only for his loyal fans this was a very satisfying effort, it also did his fanbase grow, not least because he was also able to promote this superb collection of tunes through performances on various renowned festivals in Europe, such as Garance Festival, Rototom Sunsplash, Montreux Jazz Festival, Reggae Sun Ska, and Reggae Geel.

The fruitful first collaboration between Alpheus and Roberto Sánchez led to the release of an excellent album, so the question was if they would succeed in delivering a new album that not only would live up to high expectations, but also would match or even outmatch its predecessor. After several listenings we can only conclude that “Good Prevails” is a real musical gem that outmatches the “From Creation” set. It affirms that Roberto Sánchez has a golden touch when it comes to creating a sound that perfectly fits the artists he works with (also think Earl Sixteen, Milton Henry and Earl Zero).

“Good Prevails” again features vocal cuts on a mixture of fresh originals and do-overs of classic riddims, and it’s striking that you can hardly distinguish them from each other. Apart from the Roberto Sanchéz produced riddims, this album includes riddims originally produced by Phil Pratt, Winston Riley, Coxsone Dodd and Leslie Kong. However the do-overs aren’t the obvious ones, which makes it interesting for riddim spotters to search for the original versions.

“Good Prevails” opens with a beautiful conscious tune entitled “Our Strength”, which is underpinned by the wonderful “Soul Food” riddim, an original riddim in true rocksteady stylee. It’s actually the instrumental version of this song that rounds off this album in real fine style. The next track, “Open Your Eyes”, brings more consciousness and rocksteady niceness. Great lyrics, sweet vocals and a wicked do-over of a riddim known from Phil Pratt & Ken Boothe’s “Sweet Song For My Baby”, issued as a 7″ single on Caltone Records in 1968. The solid “The Right One”, a song that goes into lovers territory, comes across a remake of a classic Winston Riley produced riddim, which is a bit faster than the previous two tracks. The riddim of the irresistible “Look In The Mirror” (originally the Wailers’ “Jailhouse”) takes us back to 1966 when ‘rudeboy music’ was the order of the day in Kingston, Jamaica. One of the standout tunes here, “Rudie No More” on the original “Shower” riddim, also carries that ‘rudeboy music’ vibe. In between these two tunes it’s “Good Prevails”, the title track over Phil Pratt’s revived “Safe Travel” riddim, that makes a real good impression.

Halfway the album the very romantic ballad “Secret Rendezvous” slows things down, thus giving the listener the opportunity to take a deep breath before he/she starts to listen to the next part of this collection. The energetic sounding ska piece “Pass The Test” is a very entertaining effort across another classic riddim. It’s followed by the slightly better “Reach For The Top” on a new version of a riddim used for Desmond Dekker’s “Sabotage”. Ska time again with the solid “Show Some Love” over the original “Alpha Reggae” riddim and “Stand Up” (“Toro Ska” riddim), a truly outstanding uplifting song. For the last vocal cut, “Liberty”, there’s been some deep digging into the riddim vaults of Studio One. Again a tune with decent conscious lyrics and a wicked riddim track, making it an effort great to hear. Next are two instrumental versions… First there’s “The Shadow”, the name of the riddim of “Secret Rendezvous”, now featuring real nice melodica play by Reuben “Ras” Telford and the aforementioned “Soul Food”.

Conclusion With both "From Creation" and "Good Prevails" being truly great albums, one can only hope that Alpheus and Roberto Sánchez will continue their fruitful collaboration in years to come.