Errol Dunkley – Keep The Pressure Down 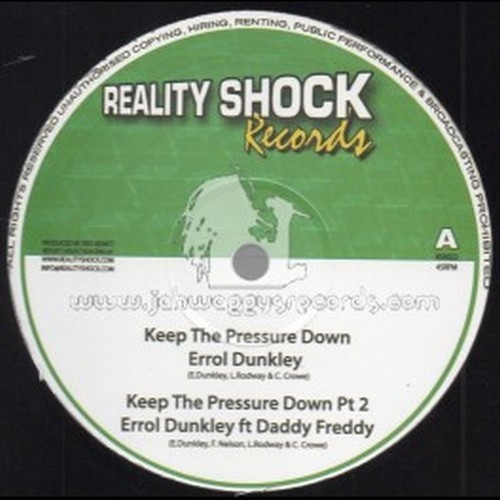 In 2013 UK’s Reality Shock in collaboration with New Zealand’s Reality Chant and Errol Dunkley himself produced a 12″ vinyl single with six cuts across a great reworking of the riddim that underpinned Errol Dunkley’s classic 1982’s tune “You’ve Been Bad”. Featured on that disc were tunes by Errol Dunkley & Daddy Freddy, Million Stylez, Deadly Hunta, Louie Culture and Silva MC along with Kris Kemist’s version.

And now, three years after that noteworthy project with Errol Dunkley, there’s finally its follow up. Reality Shock’s Kris Kemist now revisits Errol Dunkley’s 1973 classic “Keep The Pressure Down”, which was originally produced by Jimmy Radway (also the one who produced Errol Dunkley’s enduring reggae anthem “Black Cinderella”) and released on his Fe-Me Time label. Actually “Keep The Pressure Down” (and also “Black Cinderella”) were poems written by Jimmy Radway, which were converted to songs by Errol Dunkley, who at the time was already a bona fide music star.

The revitalized riddim of “Keep The Pressure Down” is a fresh roots one drop style interpretation by Kris Kemist featuring keys played by Carlos Thunderclap (formerly of the Upper Cut Band). Musically both have done a real good job, while vocally Errol Dunkley shows that he’s still in very good shape after all these years in music business. Listening to the lyrics of “Keep The Pressure Down” brings tears to your eyes as they are still relevant today as they were then. All in all a big reality song of sheer beauty.

Just like on the “You’ve Been Bad” 12″, there’s a combination tune with Daddy Freddy. The contrasting rough vocal delivery of the legendary deejay as well as his lyrical input are a worthy addition to Errol Dunkley’s effort. In 2012 Reality Shock produced and released Solo Banton’s album “Higher Levels” and now he’s back with his first Reality Shock vinyl release since that critically acclaimed album. The UK artist, whose vocal style sometimes reminds of Macka B, puts things into perspective with “First World Problem”, a solid song with incinsive lyrical content. The flipside is rounded off with the obligatory dub version nicely mixed by Kris Kemist.

Conclusion A solid release, worth hearing.