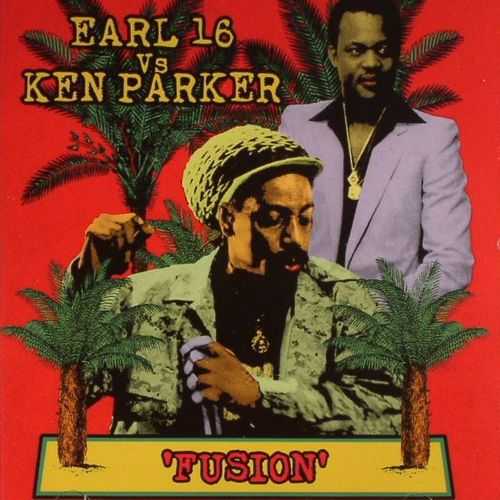 Veteran Roy Cousins, producer and former member of The Royals, has released an incredible amount of artist, compilation and dub albums since he shifted his attention for good from his singing career to production in 1978. As collectors of Roy Cousins produced material have come to know, not every album he puts out is a brand spanking new one as he sometimes compiles a ‘new’ album with tunes culled from his extensive back-catalogue. The earlier this year released cd “Fusion” is a next example of this practice.

Earl 16 vs Ken Parker’s “Fusion”, a reggae album presented in showcase style, consists of vocal tracks from Earl 16, Ken Parker and dub pieces from E.R.S. Gathered here are four tracks by Earl 16, taken from his 1982 released LP “Julia” (three of them also appeared on “Songs For A Reason”), four tracks by Ken Parker, of which three are taken from the compilation sets “Vision Of Reggae”, “Roots Of David” and “Roots, Vibes & Vision” and eight tracks from E.R.S. aka The Professor aka The Crazy Mad Professor aka Winston Brown (note: this is not Ranking Dread aka Winston Brown, nor Mad Professor aka Neil Fraser!). Most dubs were previously featured on albums such as “Scientist v The Professor: Dub Duel At King Tubby’s” and “Nexus Dub”. Renaming tracks makes things a bit confusing and should be avoided as it gives the impression that we deal with new recordings, which ain’t the case.

Apart from the somewhat poor sound quality, particularly on the Earl 16 tracks which inexplicably seem to be taken from vinyl instead of also available cd, this is an album with nuff tunes worth hearing. After his debut album for Mikey Dread, Earl 16 worked with a variety of producers including Ranking Joe & Jah Screw, Earl Morgan, Coxsone and Roy Cousins, with whom he did some of his best recordings. The latter surely includes the wicked album opener “Long Time Stepper” (aka “Jah Is The Master”), which is followed by the decent “Can’t Stop The Youth” (aka “Reggae Rock”) across The Royals’ “If You Want Good” riddim. Lyrically much more interesting is the conscious “Inheritance From Jah” (aka “Inheritance”), a strong roots tune underpinned by a percussion dominated riddim. Last Earl 16 tune is “Mind Driftin'”, a nice effort over a version of the Heptones’ “Pretty Looks” riddim.

Jamaican singer Ken Parker was exposed early to the effects of gospel music, and he drew on gospel inflections in his vocals throughout his whole career. His first group was The Blues Benders, formed in 1965, but by 1967 he was a solo act, recording sides for most of the big Jamaican producers of the day, including Coxsone Dodd (“My Whole World Is Falling Down”, a huge hit on the island in 1969), Duke Reid (“True, True, True,” one of his finest sides recorded at Treasure Isle, as was “Jimmy Brown”), Bunny Lee, Rupie Edwards, Byron Lee, Joe Gibbs, and Lloyd Charmers (for whom he recorded a fine version of Curtis Mayfield’s “Queen Majesty”). He also recorded some one-off tracks for Roy Cousins including the beautiful “What Kind Of World Are We Living In?” across Don Carlos & Charlie Chaplin’s “Unity Is Strength” riddim.

Also really nice to hear is “Forbidden Love”, a tune across the “Operation Radication” riddim, which however is outmatched by the killer rub a dub tune “Deceiving Girl”, in November 2015 released by Pressure Sounds on 10″ vinyl under its original title “Girl Asheba” and without flute in the mix. The lover’s lament “For The Last” rounds off the Ken Parker part in fine style. Remain the eight dub versions credited to E.R.S., of which “Man Of Tomorrow” (aka The Professor’s “Dub School” from “Nexus Dub”), the blistering “Harvest Time” (aka Professor’s “Inheritance Dub” from “Nexus Dub”) and “After Midnight” (aka Scientist & The Roots Radics’ “Special Request Version” and listed as Crucial Bunny Tom Tom’s “OK Carol Dub” on “Nexus Dub”) leave a good impression.

Conclusion Despite the sound quality problem, this is an album that includes quite a few goodies.