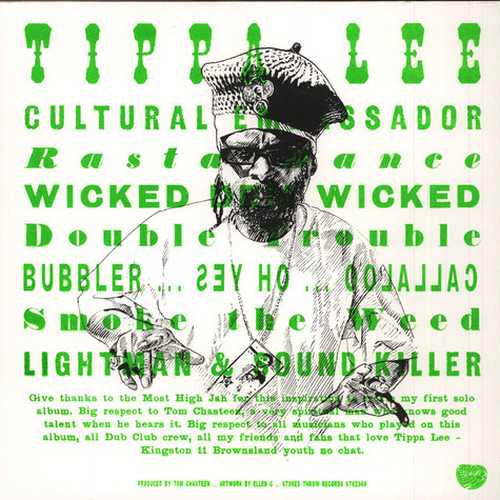 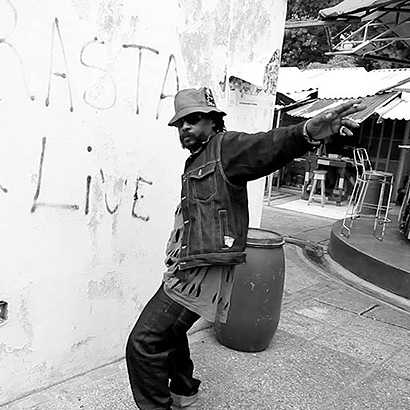 Veteran dancehall singjay Tippa Lee was born Anthony Campbell in Kingston, Jamaica. He started performing on his father’s Sound System as a child, standing up on a beer bottle box to reach the mic. He made his first recordings at King Tubby’s studio at the age of 12. He debuted in 1983 as Tipper Lee & Johnny Slaughter on their single “Sensimillia”. That year’s split album “Murder” acted as his debut LP and featured cuts from Tipper Lee & Slaughter, along with solo tracks from Toyan. His partnership with Rappa Robert began in 1987 with a series of collaborative singles that reached its peak in 1988 with “No Trouble We”, an anthemic statement against police harassment, which was a number one Jamaican hit in 1988 and is still played often on Jamaican radio. Nuh Trouble We, the album, landed that same year with Tipper now firmly established as Tippa, then another string of singles led up to the duo’s 1990 album, “Roots Vibration”. Since 2000 he has been based in the U.S, performing live and releasing his own underground CDs, not easily found outside San Francisco.

After having worked on various projects with Tom Chasteen, DJ and promoter at LA’s long-running Dub Club, their long-lasting collaboration has finally led to the release of a brand new full length Tippa Lee album entitled “Cultural Ambassador”. The latter is the result of many hours performing and recording together. The riddims were played by a hand picked studio band that included Ras Benji on drums & percussion, Freddie Flint on guitar, Mark Lightcap on guitar and Roger Rivas on keyboards and furthermore Tony Chin on guitar and George “Fully” Fullwood on bass, both core members of the mighty Soul Syndicate, one of the top reggae session bands in Jamaica from the early 1970s to the mid-1980s.

The title track “Cultural Ambassador”, across a great horn laden riddim, instantly makes clear that this album not only features a vocal style and a sound that both hark back to the dancehall music of the early ’80s. It also strictly deals with cultural/conscious lyrics as this tune has Tippa Lee expressing that he wants to ‘kill them with reality’, meaning that he musically kills the negative vibes of artists singing unconscious lyrics, because he sees himself as a defender for spiritual and positive lyrics. Big tune and a great start of an album that comes with a whole heap of deadly goods to fulljoy. “Rasta Dance” across a revitalized version of Studio One’s much versioned “Answer” riddim is a solid effort, that’s however outmatched by the crucial “Wicked Them Wicked”. Rewind & come again!!!

“Callaloo”, underpinned by a rockstone heavy relick of a classic riddim (Horace Andy’s “Every Tongue Shall Tell”/Sugar Minott’s “Strictly Sensi”), is a real killer and a true highlight of this album. The song tells about the ghetto man menu. If you couldn’t afford chicken, ox tail, or goat, callaloo would be the main menu for the poor man. Carrying totally different vibes, but equally strong are “Lightman” and the single “Sound Killer” Especially the latter deserves full attention, lyrically as well as musically. Driven by the bassline of the “Drum Song” riddim, enhanced by the percussion and keyboard, and mixed in such a way that it gets an extra dimension, this track is outrageous.

Sometimes it’s good to have some collaboration efforts on an album, especially when it’s a strong supporting cast. And that’s the case with artists like Sister Nancy, Cornell Campbell, Tony Tuff and Bionic Clarke (a veteran roots reggae singer from the Hills of Manchester, near Mandeville, Jamaica). Although the creeping “Double Trouble” with Bionic Clarke is a decent piece, it simply doesn’t come near the quality of the powerful ganja tune “Smoke The Weed”, done in collaboration with Sister Nancy. However the best has yet to come with first “Peace In The City”, a mighty social commentary featuring Cornell Campbell and then the superb “Jahoviah” with Tony Tuff… a real scorcher.

Disc two of the cd contains the 10 tracks from the vinyl LP “Dub Them With Reality”. The summer of 2013 saw the release of a dbl vinyl LP compilation called “Foundation Come Again”, which was preceded by its dub companions “Signs & Wonders In Dub” and “Bubble Dub”. These dub albums were mixed by producer Tom Chasteen, who did a surprisingly great and fully satisfying job. The same can be said about this dub project. Once again he treats the listener to mostly stunning dub versions mixed in an ‘old skool’ style, which evoke the heydays of dub masters like King Tubby and Scientist.

Conclusion With "Cultural Ambassador", Tippa Lee not only has blown new life into his career in a big way, he has also reached the point of no return. So all massive and crew... hopefully there will be more great offerings from this artist in the near future.