The Wailers – The Wailing Wailers 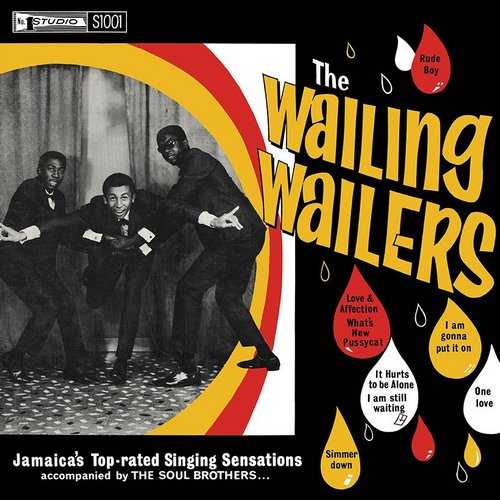 Title: The Wailers – The Wailing Wailers

In 1964 The Wailers consisted of a five piece harmony group comprising Neville ‘Bunny Wailer’ Livingston, Winston ‘Peter Tosh’ Mackintosh, Robert ‘Bob’ Marley, Junior Braithwaite and Beverley Kelso (who had replaced Cherry Green aka Ermine Bramwell). They were trained in voice control, harmonies and stagecraft in the “government yards in Trench Town” by successful singer and songwriter Joe Higgs, of Higgs & Wilson, before voicing their first records for the legendary producer Clement ‘Coxsone’ Dodd, who founded one of Jamaica’s most renowned recording studios and record labels in the late 1950s. The label helped to pioneer ska, rocksteady, dub and dancehall, and discovered and released music from The Skatalites, Delroy Wilson, Jackie Mittoo, The Maytals, Jackie Opel, The Gaylads, Alton Ellis and, of course, The Wailers.

The first song The Wailers did for Studio One under the tutorship of Joe Higgs was the exciting ska tune “Simmer Down”, which became a number one hit in Jamaica in February 1964. That song, directed to the ‘Rude Boys’ of the ghettos of Jamaica at the time, sending them a message to cool down or “Simmer Down” with all the violence and crime going on in Kingston, rounded off their 1965 released debut album “The Wailing Wailers”, which now – for the very first time – gets a CD reissue with the original track listing and artwork. During their collaboration with ‘Coxsone’ Dodd, the Wailers recorded every different kind of music the producer requested of them. So the Wailers recorded traditional mento and calypso, gospel, folk, doo wop harmony, soul and pop covers, Christmas songs as well as their own material. This is why interpretations of songs such as Tom Jones’ “What’s New Pussycat”, William Bell’s debut tune from 1961 “You Don’t Miss Your Water (When The Well Runs Dry)” and The Moonglows’ beautiful doo wop song “Ten Commandments Of Love” are included on “The Wailing Wailers”.

Then, in 1965, Beverly Kelso left The Wailers. The other four members of the group would take turns on the lead vocal parts: Junior Braithwaite most memorably on the lovers lament “It Hurts To Be Alone”, recorded weeks before he too left the group and emigrated to the US. Bob Marley handled the lead vocals on “Put It On”, the excellent opener of their debut album, “Rude Boy”, and the fabulous “I’m Still Waiting”, heavily inspired by The Impressions’ song with the same title. And also Peter Tosh and Bunny Wailer took the lead on several of the over 100 tracks they recorded at Studio One. Listen to the 1965 released single “Lonesome Feeling” and hear how the vocals of the six singers are bouncing around, which – although it seemingly creates some chaos – makes the song so special. Also included here is the awesome “Love & Affection” and a great early version of “One Love”, their most famous song with inspiring lyrics, played and sung and loved all over the world.

Conclusion "The Wailing Wailers" is the first release from Studio One, in conjunction with the Yep Roc Music Group. More titles from Studio One's catalogue will be re-released in their original formats, with track listings and album artwork intact.