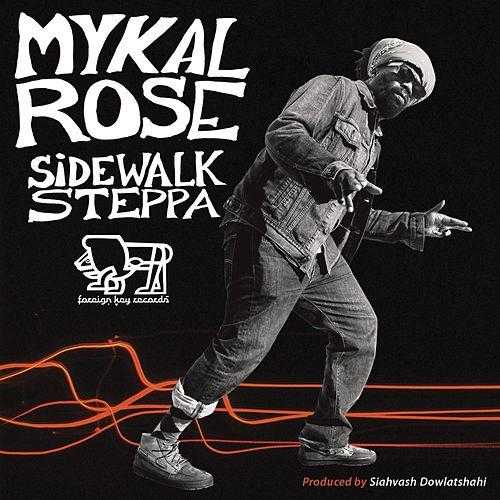 Not every album Michael Rose – now mostly spelled Mykal Rose – released since he parted ways with Black Uhuru in 1985, with the intention of redefining his musical direction as a solo artist, was a winner. Some of them were real weak efforts (think “Bonanza”, “Voice Of The Ghetto” and “Be Yourself”), while others like e.g. “Selassie I Showcase”, “The Taxi Sessions” and “African Roots” can be ranked among his best solo albums. But, although history has learnt that his offerings might vary in quality, he’s one of those reggae artists who’s always worth checking as he may surprise you with a great album. And that’s exactly what he does with this new set coming from the San Francisco Bay Area entitled “Sidewalk Steppa”. This 15 track album is actually the follow up to Mykal Rose’s 2013 released EP “Showdown Inna Bloody Town”, which was produced by Siahvash Dowlatshahi.

“Sidewalk Steppa” has Siahvash Dowlatshahi in the producer’s seat again and, as one could expect taking into account his production work for the “Showdown Inna Bloody Town EP”, he has done a really great job. Musicians involved in this project include the riddim twins Sly & Robbie, legendary Jamaican keyboardist Franklyn “Bubbler” Waul, Ryan Moore of Twilight Circus, Siah, Zak Najor, Strickland Stone, Goopy Rossi, Toho Saunders, Alex Somerville, Gregory Davis, Brian Teel, Steve Haney and Bay Area horn section Black Water Gold (Luis Andrade – sax, Aaron Bennett – baritone sax, Chris Brown – trumpet). Their live played riddims are impeccable and Mykal Rose is in top form on this burning set, which is engaging from beginning to end. “Sidewalk Steppa” brings in a variety of styles for the Grammy winning singer, who fully shows that he can handle that with ease due to his wide-ranged voice and the valuable experience and maturity gained during a career spanning more than 40 years.

The brilliant and uncompromising title track “Sidewalk Steppa”, one of the two songs featured on this album that reunites Mykal Rose with Sly & Robbie, immediately makes clear that the veteran singer takes no prisoners. It’s the first track that features Black Water Gold, and luckily not the last one, because this stellar horn section adds the flavorful glue. Then the tempo slows down for the beautiful “Crown”, a song with lyrics to match and performed in a completely different way than the previous track. A real gem fi sure! Next comes “Bad Names”, which is another highpoint with its noteworthy twists and gorgeous groovin’ horns. “Dutty Babylon Road”, one of the best tunes on “Showdown Inna Bloody Town”, reappears on this set, while “Sorry For The Man”, originally from Black Uhuru’s 1977 debut album “Love Crisis”, has been refurbished in a decent way.

Halfway the vocal tracks (one third of the entire album) we’re totally satisfied with what we’ve heard so far. Fully convinced that also most of the remaining vocal offerings will make a serious impression. And indeed, that’s what happens, especially when listening to the exciting “High Grade Train”, the superb “Chattabox”, and the poignant and penetrating “Shanty Shack”, which – together with “Chattabox” – shows that Mykal Rose has never strayed far from his ghetto roots. “Jungle Justice”, the second track that features the legendary riddim twins, is a nice tune with head nodding funk & jazz vibes. Icing on the cake are the last five tracks of which in particular “Dub Steppa” and “Crown Dub” are pure wickedness.

Conclusion "Sidewalk Steppa" is one of those albums that instantly captures your full attention and gets stronger and stronger after repeated play!