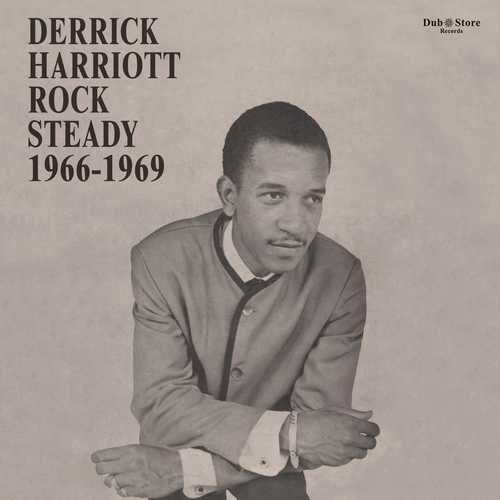 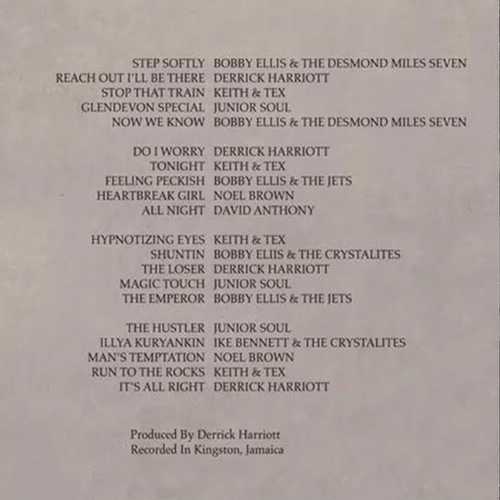 After having sung in church, Derrick Harriott started in the ’50s attending a number of stage shows. Soon he entered Vere Johns Junior’s Opportunity Hour talent contest and formed the duo Sang & Harriott. They caught the attention of producers/soundsystem owners Duke Reid and Coxsone Dodd. Originally a self produced special, “Lollipop Girl” became a big hit for Dodd’s Downbeat Sound, but Duke Reid managed to get his hands on a copy of it and so “Lollipop Girl started so many conflicts….” as Derrick recalls. Claude Sang left Jamaica and Derrick formed the ska/doo-wop group The Jiving Juniors. For Reid they cut “Lollipop Girl” (as a vinyl single) as well as a few other sides. Later on they did some tunes for Dodd, “Over The River” and “Sugar Dandy” (later covered by Millie).

When The Jiving Juniors disbanded in 1962, Derrick Harriott set up the labels Crystal Records and Musical Chariot. He scored with singles such as “I Care” and the Donnie Elbert do-over “What Can I Do”. Ska started to slow down in 1966 to the more reflective rocksteady beat. That same year Derrick opened his own record shop. He worked with some of the island’s best musicians, brought together in The Desmond Miles Seven, later he assembled the Crystalites with Bobby Aitken, Jackie Jackson, Hux Brown, Winston Wright, Lyn Tait, Joe Isaacs and Bobby Ellis. He rocked Jamaica with his productions. On February 11th, 1968 he organised a memorable recording session at the WIRL studios where he cut famous tunes like “Stop That Train” by Keith and Tex, Rudy Mills’ “Long Story” and his own tune “Solomon”. Derrick scored with “Walk The Streets”, “Do I Worry” and “The Loser”. “John Jones” by Rudy Mills was a major hit 1968. The rocksteady days are regarded as the best days of Jamaican music. Groups and singers like The Melodians, The Paragons, Derrick Harriott, Rudy Mills, Keith & Tex, The Sensations, The Techniques and Alton Ellis churned out hit after hit; many of which have been revisited again and again.

When rocksteady came to its end Derrick moved his business to 86 King Street but eventually had to leave after three burglaries. His new ‘home’ became Twin Gates Plaza on Constant Spring Road in Kingston. He continued recording and producing with considerable success. The deejay Scotty recorded some excellent sides with Derrick across Derrick’s foundation riddims. With The Kingstonians he cut rootical tunes like “Sinner Man” and “Sufferer”. He also released two sought after dub sets, “Srub A Dub” and “More Scrubbin’ The Dub”. With these albums he became one of the first producers to use King Tubby’s mixing talents. With Dennis Brown he recorded the “Super Reggae & Soul Hits” album. Derrick Harriott helped to shape the chirpy rocksteady sound in Jamaica and is spoken of with reverence by many Jamaican artists.

This 20 track compilation set shines on Derrick Harriott’s productions during the heydays of rocksteady 1966 to 1969. The set opens with the 1967 enduring rocksteady instrumental masterpiece from Bobby Ellis & The Desmond Miles Seven, Step Softly. One of our reviewers, Professor Barnabas, described this tune as follows:” Step Softly opens with a piano line and mournful horns melody reminiscent of early Fania All Stars workouts, driven by a brittle snare offsetting the bass undertow and weaving horns structures. An Archie Shepp style solo further focuses this strict composition, honing it into a work of beauty and imagination.” Boom! Trumpeter and arranger Bobby Ellis was one of the key figures in the Jamaican music industry. As so many musicians he attended the Alpha Boys School. He was a member of the Studio One house band, The Soul Brothers, and played on countless reggae productions for more than thirty years. Besides “”Step Softly” we’ll find some more fine rocksteady instrumentals on this album like “Now We Know” and “The Emperor”. The tune he cut with The Jets, “Feeling Peckish”, is a pumping soul tune, reminding us heavily of the great tunes coming from Stax Records.

Derrick’s interpretation of the classic Motown recording by The Four Tops, “Reach Out I Will Be There” stays pretty close to the original, but he adds a smooth dancehall touch to it. The Keith & Tex rocksteady classic “Stop That Train” is arguably the greatest hit from Derrick’s catalog. Later Derrick issued a formidable deejay version of the riddim by Big Youth called “Cool Breeze”. There’s more Keith & Tex classic stuff here. Their other masterpiece from that time is “Tonight”, a tune with a powerful riddim still used after all these years. The third Keith & Tex song is the lesser known “Hypnotizing Eyes” that was released at the end of the rocksteady era. It’s a heartfelt lovers tunes with beautiful close harmony vocals. The same goes for the impeccable tune “Run To The Rocks”. Noel ‘Bunny’ Brown was a member of the re-formed group The Federals and later became vocalist with The Chosen few. His two first singles for Derrick Harriott (“Heartbreak Girl” and “Man’s Temptation”) are included here. Ike “B” Bennet is a piano and organ player who joined the Crystalites in 1967. His biggest hit came with “Illya Kuryakin”, an instrumental based on Percy Faith’s “Theme From A Summer Place”. The title comes from the ’60s tv series “Man From Uncle” that featured David McCallum as undercover officer Illya Kuryakin. David Anthony Henry did only two tunes for Derrick Harriott, in 1967 “Get You Off My Mind” and in 1968 the here included awesome lovers tuner “All Night”.

We all know Junior Murvin, the man with the unique multi-octave falsetto voice from Port Antonio, but he also did some excellent sides for Derrick as Junior Soul. In 1967 he debuted with the self penned song “Miss Cushy” for producer Sonia Pottinger. He moved over to Derrick Harriott’s stable where he cut “Glendevon Special” aka “Chattie Chattie”. Such a wicked tune! On the album we also find two up-tempo early reggae tunes from Junior, “Hustler” and “Magic Touch”. Two of Derrick’s best known hits are included here as well. Hit vibes galore with “Do I Worry”. The song was a hit in 1941(!) by The Inkspots. Derrick’s awesome version was inspired by the 1964 version of The Tams. Bobby Ellis & The Crystalites deliver the instrumental version, “Shuntin” with exquisite horns blowing by Bobby Ellis. Another milestone in Derrick’s career is his signature tune “The Loser”, rocksteady style pur sang! He must have been inspired by the Bobby Lee soul song of the same name, but Derrick’s tune is such a scorcher. No wonder Freddie McGregor included this tune in his Jamaican Classics set.