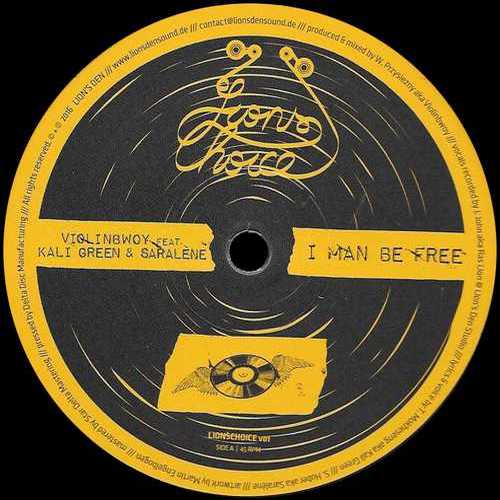 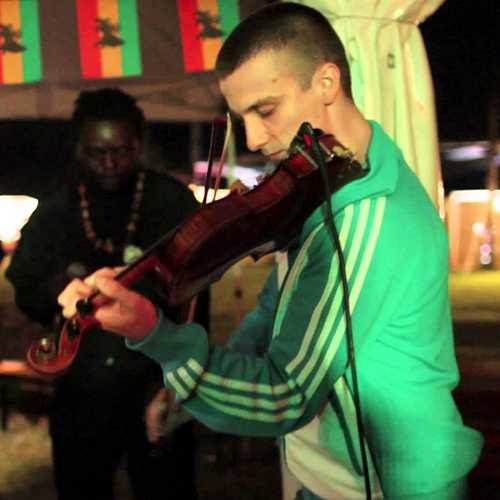 Wroclaw, Poland based classically trained violinist Violinbwoy creates sounds of Roots & Culture. Once his music was recognized, he was requested to deliver his heavy dubplates to sound systems like the mighty Jah Shaka, Blackboard Jungle and many more. In recent times a number of his heavy releases on acclaimed Dub/Rootzstep-labels have entered the Dub sessions near and far. This 12″ single sees him collaborating with Kali Green and Saralène, two righteous voices from Berlin, Germany. Kali Green is an MC, producer, sound engineer, beat maker and song writer, who hails from the southern hemisphere of Africa in the mountain kingdom of Lesotho, while Tübingen, Germany born Saralène is known from her Alldub produced album “Saralène’s Lions Heart Dub Band” and several releases with people such as Next Generation Family, Vibronics, Solo Banton, Longfingah, Dani Locks, Jah Chalice Soundsystem and Adubta.

The first track on the A-side of this platter, “I Man Be Free”, sees Saralène and Kali Green, chanting for freedom and unity over a mesmerizing Steppers riddim that gets you dancing and then puts you in a trance. Lyrically and musically this is a big tune with a deep bass sound to fulljoy. After having been treated to the almost 5 minutes lasting vocal cut, it’s time for the mind-blowing heavyweight dub version “I Dub Be Free”. And if you (sadly) think it’s over, you’re mistaken because the flipside kicks off with another dubbed up version of “I Man Be Free”, the all conquering killer dub “I Dub Be Lion”, which turns out to be an extra raw and ruff offering. After these devastating soundscapes it’s time for a more relaxed listening experience. Kali Green’s message tune “Whole Heap A Trouble” almost sounds like a classical piece with a lovely piano interspersed with bombastic percussion and orchestral strings. “Whole Heap A Trouble” underscores why this artist is also referred to as ‘SirKaliGarten the Lyrikal Assassin’.

Conclusion Powerful conscious vibrations from beginning to end. Vinyl collectors, get this mouth-watering 12" single while you can!