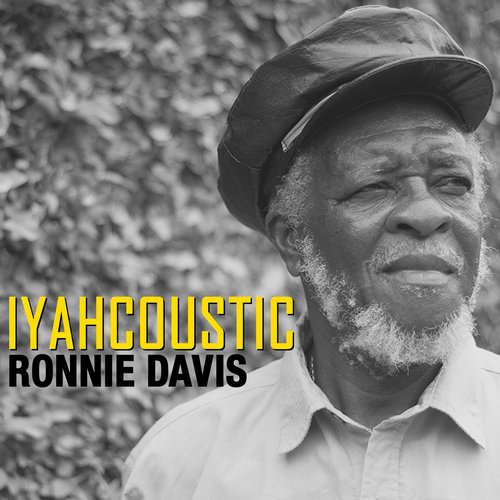 Over the last decade, veteran artists have been putting forth acoustic sets with great degrees of success. Consider Clinton Fearon, Barrington Levy, Richie Spice and RONNIE DAVIS. The Foundation statesman has released, “IYAHCOUSTIC”, his first full length release in 20 years. Simply put, this is a complete testament to the true experience and endurance of Mr. Davis.

Ronnie Davis’ career began in the early ’60s when his ambition took him to local talent shows. Hailing from Westmoreland, he formed The Westmorelites (a group that involved original members of The Itals). In 1969 he joined the legendary Tennors; a link that lasted until the early ’70s. His first solo hit, “Won’t You Come Home”, dropped in 1975 for the late, great Lloyd Campbell. The following year, “In A Dis Ya Time”, was cut and credited to “Keith and Ronnie”. A monster hit; Lloyd Ricketts joined and The Itals began their Royal legacy. After monumental success, Ronnie left the group in 1995 to form “Ronnie Davis & Idren”. The resulting “Come Straight” (1996) was critically acclaimed. Mr. Davis has kept active; touring with The Pocket Band (2007-8) and briefly rejoined The Itals in 2009. In 2012, he reunited The Tennors (w/George Murphy and Henry “Sadiki” Buckley,Jr.). Ronnie Davis’ impact on Jamaican music’s evolution is remarkable.

The set begins with “Iyahcoustic”; a brief reasoning from Ronnie. “Strange Things” is a much championed classic that Ronnie visited years ago and collectors embrace the 1981 Chanan-Jah 12″. Mr. Davis delivers with such passion and ethereal quality that’s cradled with vivid guitar, bass and percussion. This transcends any musical boundary; just beautiful!! “False Leaders” (he cut this initially in 1979) gets the true treatment here. Triumphant in nature with amazing chord structure and potent front and centre vocals. This is real deal music without any gimmicks. Singer and musicians in perfect unity.

“Beware Of Evil Men” is one of Ronnie’s most sought after singles (On Top Records). Acoustically, it reaches highest heights. Deep history lesson presented with undiluted heart and soul that showcases his limitless vocal range. Salute to Mitchum, Sadiki and Congo Billy for such an ethereal musical backbone. STANDOUT SELECTION!! “Fancy Make Up” (included on 1979’s “Gregory Isaacs Meets Ronnie Davis” album) is a master stroke of artistry. This observant piece takes on a Tennors feel with the vocals of Sadiki. All the way strong! “I Won’t Cry” is a 1974 classic Ronnie cut during his BUNNY Lee years. His voice shines through with flecks of falsetto with flowing guitar and Pam’s majestic vox. A song to be embraced by all music lovers!! “Rivers Of Babylon” is a seamless interlude.

“Got To Go Home” is memories by the score. One can sense the fulljoyment in the studio indeed. Such beautiful guitar; vibes and vibes. This has the caliber of “Many Rivers To Cross”. Instant rewinder!! Ronnie scored in the early ’70s with “My World”. He presents it here in soulful and dynamic style. Such a rich sound created with three musicians and one truly gifted singer. “Star” is a crucial prelude to “Every Rasta Is A Star”. Words cannot fully describe the absolute beauty of this anthem. A triumphant fulljoyment and celebration of the strength of Rastafari. Textured layers of word, sound and power. One of the finest acoustic vibes laid down in recent times. Glory to the sound!!

“Swinging My Love” is a pivotal piece of Jamaica music history. Ronnie recalls it here again with divine delivery. Robust riddim niced up with upfull flute and backing vox. A Tennors imprint that’s been gloriously revisited by Johnny Clarke, Sanchez and many others… masterpiece!! “No Weak Heart” is a serious Roots piece that Mr. Davis initially rocked in the ’70s. It’s presented here with truth and conviction and gets to the Roots of the matter with manners and respect. “Better Days” is a great interlude with deep African chanting that closes this set just right.

“IYAHCOUSTIC” is simply fantastic. Ronnie Davis takes the listener on a beautiful history lesson that recalls great moments of his career; great moments in Reggae music. It’s presented in a way that certainly crosses many musical boundaries and each song’s appeal will be embraced by lovers of many genres of music. The JA feel abounds but the sounds are universal and crucial. Maximum respect to all involved in this instant classic.

Conclusion Do not miss out on this timeless experience from one of Reggae's most triumphant and enduring artists. GO DEH!!