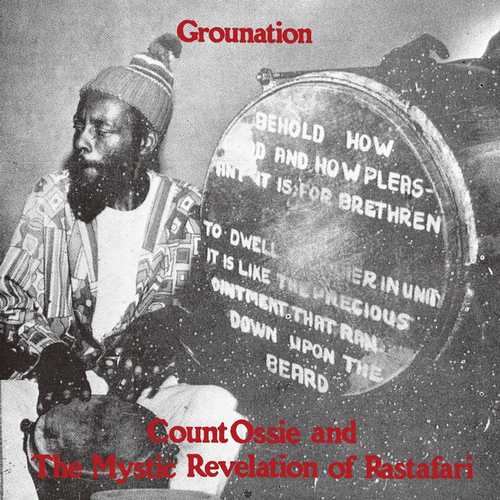 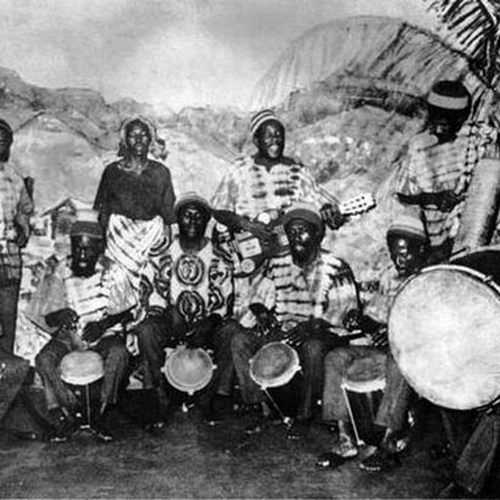 The Mystic Revelation Of Rastafari is a fusion of the Mystics, led by gifted saxophonist and spiritual seeker Cedric ‘Im’ Brooks and the Count Ossie Rastafarian Drummers. In the past these two groups were responsible for some of the most colourful and creative music that has emerged from the island of Jamaica. The horns and bass of the Mystics met and understood the drums of the Count Ossie drummers at the African Cultural Centre in the autumn of 1970. A few months later they were together and have remained so through tough and trying days (a.o. Cedric ‘Im’ Brooks left to form the Divine Light/Light of Saba in 1974, while Count Ossie was killed in a road accident in 1976). These days, The Mystic Revelation Of Rastafari still gathers every Sunday at their Rockfort home base.

Originally released in Jamaica as a triple vinyl LP set on the New Dimension imprint in 1973 (and then on the Ashanti & Vulcan labels in the UK), this groundbreaking work has always captured the imagination of those seeking the origins of Reggae music and Rastafari. Count Ossie, figurehead master drummer and leader of the Rastafarian drummers, was highly involved in the creation of the former, and was of course a well-respected Rastafarian. He and his drummers played on the original version of “Oh Caroline” by the Folk Brothers, a tune that caused a musical sensation and one of the records that changed Jamaican Rhythm & Blues into Ska.

This tune, “Oh Caroline”, is actually on this set. It’s not the original, but it is still a powerful piece, performed in true Mystic Revelation Of Rastafari style. Of the fifteen tracks spread over the two CD’s, four are traditional Rasta chants including “Bongo Man” (4:50), “Four Hundred Years” (4:34), which is later repeated in a longer form, “Oh Caroline” (3:31) and “So Long” (4:48). “Narration”/”Narration Continued” (12:44) is an excellent example of Rastafari reasoning, while tracks 4 and 6 are listed as ‘Poems’ and are exactly that. “Mabrat (Passing Thru)” (3:26) “Lumba” (7:07), a beautiful version of Jackie Mittoo & The Soul Vendors’ “Drum Song” from 1968, “Ethiopian Serenade” (4:10) and the incredible “Grounation/”Grounation Continued”” (30:13) are more instrumental in their nature and feature the full range of Rasta drumming .

Horns are also a big part of this set and feature Nambo Robinson on trombone, Ras Sam II on baritone sax & clarinet and Cedric ‘Im’ Brooks, who is also credited as musical director, on tenor sax, flute & clarinet. These arrangements are strongly influenced by Jazz. Produced by Arnold Wedderburn this set is essential listening for anyone interested in Reggae’s past, present and its future.

Count Ossie & The Mystic Revelation Of Rastafari together with Ras Michael & The Sons of Negus are two of the foundation stones that the music is built on.

Conclusion A good purchase for those seeking the origins of Reggae music and Rastafari.