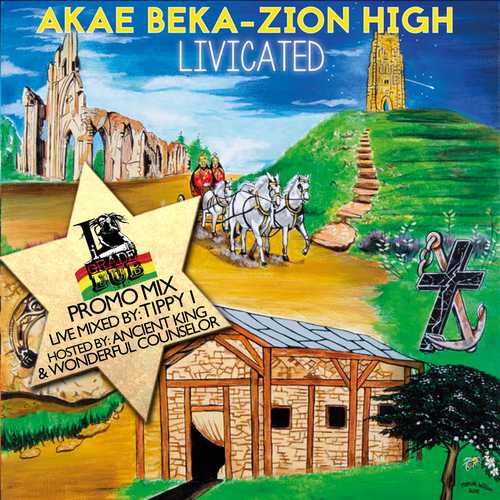 It was in 2015 that Midnite’s esteemed lead vocalist, poet and thinker Vaughn Benjamin, who added the name Midnite whenever he was involved in a project for which he collaborated with others (think Lion Tribe, Ras L, Mystic Vision, Desmond Williams etc.), decided to drop the name Midnite (perhaps due to the permanent change of members in the Midnite band) and continue his music career as lead singer of Akae Beka, a group consisting of Vaughn Benjamin himself, Edmund Fieulleteau (guitar), Kenny Byron (guitar), Sly Molina-Curet (drums & percussion), Ras L (bass) and Suren Fenton (keyboards).

Since then Vaugh Benjamin, who quite simply is Akae Beka, came up with two studio albums, first “Hommage To The Land”, done in collaboration with Fifth Son Records from New Mexico, and then the I Grade Records produced “Portals”. And recently the third set, actually his second album of 2016, saw the light of day. For this brand new collection of tunes entitled “Livicated”, Akae Beka teamed up with Florida based Zion High Productions, known from quality releases such as Ziggi Recado’s “Therapeutic”, Cornell Campbell’s “New Scroll”, Lloyd Brown’s “Rootical” and Ras Attitude’s “Holding Firm”.

Zion High Productions is part of a producers collective called Zion I Kings, which includes Laurent “Tippy” Alfred from I Grade Records, Andrew “Moon” Bain from Lustre Kings and David “Jah David” Goldfine from Zion High Productions. These well respected producers had the seemingly near impossible task to match or even outmatch the outstanding “Portals” album. And now after all the hard work done by main producer, Zion I Kings’ bass player Jah David, who for this project was joined by Aston Barrett Jr. on drums, Chet Samuel on guitar, Andrew “Drew Keys” Stoch on keyboards, Jah Bless on horns, and the legendary Yami Bolo playing the melodica, the overall conclusion is that “Livicated” is a matching follow up to “Portals”.

Looking back at the about 60 albums recorded by Vaughn Benjamin/Minite/Akae Beka since he entered the reggae scene in 1997 with the “Unpolished” set, it’s obvious that musically and lyrically speaking there hasn’t been a great shift. Even traces of an extraordinary, innovative or inventive approach can’t be found. However this doesn’t mean that there hasn’t been any development in Vaughn Benjamin’s musical endeavors. The days of long, slow minutes of a never-changing riddim pattern made up of drums, bass and guitar are left behind. Throughout the years it were subtle alterations that slowly but steadily took the music to the next level. And thus the listener was more and more treated to full sounding riddims, which kept things interesting. Lyrically nothing changed; no verses, no refrains, just a load of lyrics that are intended to make you think. In fact Vaughn Benjamin’s lyrics are like some ancient text full of wisdom, and timeless.

The 13 tracks included on “Livicated” benefit from the majestic original riddims with some truly great horn arrangements that underpin the singer/songwriters’ inimitable voice and lyrical content. The album takes off with the compelling “Firmness”, a true scorcher with Akae Beka spitting his reality lyrics like hot lava. Equally strong, but coming with a different vibe, is the next song entitled “Usward”. The latter is one of the album’s standouts as the backdrop of this song is very impressive, while Akae Beka beautifully delivers the lyrics of this message tune. Also “Discreet”, the last track of the first quarter of this set, is an excellent piece that caresses the eardrums. All in all this is a great way to start!!

Next comes the title track “Livicated”, which turns out to be a wonderful tribute to His Imperial Majesty. It’s followed by the mighty “Daughtaz & Sunz”, a song that unlike its preceding tracks doesn’t instantly shows captures your attention, but instead grows on you the more you listen to it. “Loose The Gates” is a cautionary tune with a serious message that deserves special attention of the listener. “Lifetime”, already known from Lustre Kings Productions’ “Lifetime Riddim EP”, is a solid offering with nice trombone play by Jah Bless. With “Have Herd”, Akae Beka treats the listener to another worthwhile song in which he once again praises His Imperial Majesty. And then there’s “Faith”, a tune of sheer beauty with horns that rule!! The precious “Handle Sumptin” is stamped with class all over, one of the album’s highlights. “Eyelidz” is a song everone can relate to as we all experience difficulties in our lives which we have to handle in the right way in order to keep their impact as low as possible. Compared with the beginnings of this album, the last three tracks, and in particular the solid “Over Antichrist”, carry a different feel and vibe, which keeps this collection interesting throughout.

Conclusion This is a another major work from Akae Beka, or should we say Vaughn Benjamin, so don't miss it!